The Tradition of Quotations 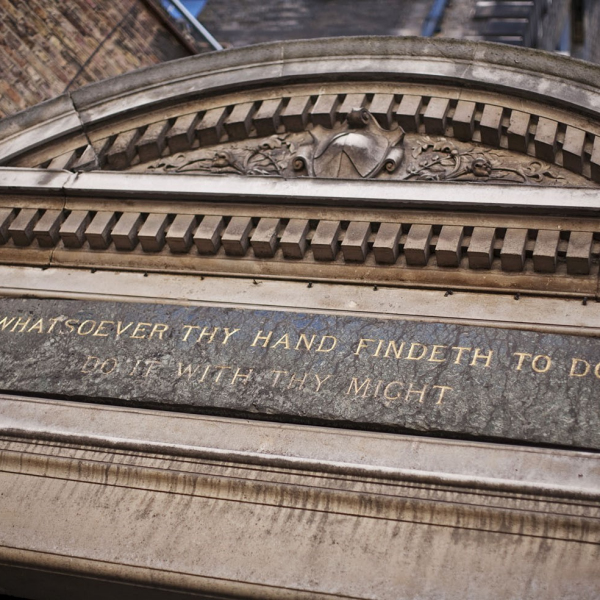 Quote displayed on plaque above the entrance to the library at St Bartholomew’s Hospital. It is from the Bible (Ecclesiastes 9:10) but may also have some basis in Aesop.

During the Autumn semester, I was asked to write a few words on the eight historical literary figures and the eight Ancient Greek Philosophers whose busts and names run around the base of the Octagon dome. They dominate the space that was once the library. As I wrote these articles I asked myself what a quotation is and why do we use them?

When I wrote about Lord Byron the descriptive quotation by Lady Caroline Lamb came to mind: “Mad, bad and Dangerous to know.” This was written in the 19th century but still felt relevant in the 21st century when Sir Ranulph Fiennes, the British explorer who followed in the footsteps of Sir Robert Falcon Scott, used the quotation as the title to his autobiography. Lady Caroline also said of Byron that “if he is as ugly as Aesop. I must see him.”

So where does this idea of repeating what has been said before come from? We can trace it back through cultural heritage, folklore, oral tradition and in doing so we bring a sentence, the turn of phrase of a speaker, to life and thus emphasise a viewpoint. There is a strange human propensity to memorise and repeat lines of text from historical literary giants such as Samuel Johnson, John Milton, William Wordsworth, and Sir Walter Scott. There are quotes to be read and spoken.

When we look around us the world itself is full of quotations: travelling to and from work there are advertisements using them on the trains and buses, there are epithets on our graves, sound bites from politicians, and then television and radio shows that people quote, Radio 4 even has a programme called Quote Unquote. Throughout the world we like to quote the utterances of someone’s speech or writing and share these thoughts with one another through social media; the quotes connect us and express our universal human feelings perhaps more eloquently than we can ourselves.