New Year, New Restrictions: To Leave or Not To Leave… 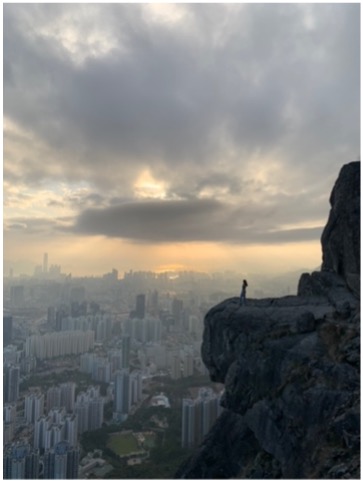 If you remember, or rather if you are new to these Hong Kong blog series, in my first blog back in November I wrote, and I quote “Now is one of the best times to be an exchange student in Hong Kong as things are slowly coming back to normal. HKU had stopped face-to-face classes in September 2019!”. So… that didn’t end well.

Once semester 2 started in January, we only had one week of in-person classes until everything moved online. In the beginning, that was only for the first 2 weeks, but later it carried on for the entire semester. Not only was our exchange university (expected to be in-person) experience brought to an end, but Hong Kong overall had also shut down a lot of places. Museums, arcades, ice rinks, beauty salons, karaoke, clubs and bars... basically, all forms of social life/entertainment shut down. Dining was restricted to only 2 people per table and only until 6 pm. A lot of things were happening at once and no way could one have imagined their exchange year to completely flip around in such a way. 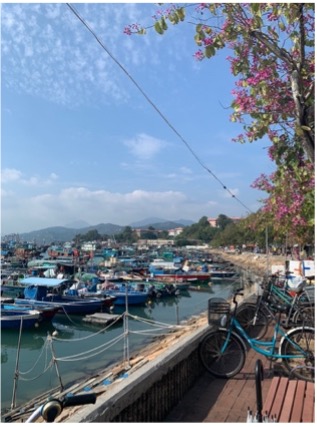 This all came in light of Covid ‘entering’ Hong Kong in late December 2021. In the many months prior to this, Hong Kong never had a single Covid case. As it was impossible, no one was allowed into the city. Even in December, the entry restrictions were still high, but the unforeseeable happened in Hong Kong, that is, covid. And almost immediately, there was a panic. I witnessed long queues to get the last haircut done, empty supermarkets, some people getting angry at others for eating/drinking in public…. It was a very strange time. And I knew it would only get worse before getting better. Hong Kong went from ‘zero-Covid’ to the world’s highest covid-19 deaths per capita rate. All in the blink of an eye. The most difficult/frustrating part about this was that Hong Kong, in my opinion, was not ready for Covid. The city had spent so long trying to keep covid out that they had never prepared for the worst-case scenario about what to do when it comes into the city. In the meantime, places like the UK were completely back to normal.

Funnily enough, when the new restrictions were being announced, I was on a cruise. It was a cruise to nowhere and my first ever cruise with a bunch of exchange friends. Looking back, I am so glad I was able to experience it, as all the ones after those dates were suspended. What was funnier was that we were returned to the terminal one day before our cruise trip was supposed to end. That is because there were 9 close contacts on the cruise, and even though they tested negative, the cruise came to an early end. We had a grand exit, with the press capturing every moment of sadness on our faces, and one friend even got interviewed about their disappointment!

What followed from the end of paid social/fun activities was a lot of exploring/hiking/sightseeing, long days out and more discovering what Hong Kong truly had to offer, at not much of an expense. I saw these new restrictions as a way to connect with the locals even more. On a more serious level, I was never bothered by any of these new restrictions. I had a fantastic first semester where I got to experience Hong Kong at its high and now, I was lucky enough to see what the other side of it is like. It was never a lockdown, nothing like what the UK had initially done and kept extending. The panic buying in Hong Kong took me back to the panic buying in the UK. In Hong Kong, it didn’t last for as long; stores were stocked up again. And again, I saw the major difference in the west and east attitudes. Even though there was probably a sense of tiredness about the never-ending rules, people still followed them. 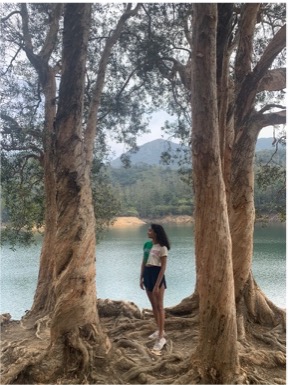 So, what did I get up to? I explored the beautiful island of Cheung Chau, Shing Mun reservoir/Pineapple Dam Nature Trail, Silvermine Bay, Kam Shan Country Park, Kowloon Walled City, Devils Peak, the streets of Mong Kok/Jordan, Flower Market, Pineapple Mountain, Suicide Cliff, Ozone and much more. I had a lot more days to myself this semester than I had last semester. I guess it helps to have to do university from your dorm. Having more days to myself meant having better and longer conversations with those back home, which is always nice. Also, it meant that I cooked a lot more as well. I found that I always cook when I am feeling the happiest. I found it therapeutic and very satisfying in building on this new skill that I had recently learned. I also cycled with a friend through one of the best cycling trails in Hong Kong – from Sha Tin to Tai Mei Tuk. This journey led me to discover my favourite park in Hong Kong, Tai Po Waterfront Park. I revisited Thousand Islands, which must be one of my favourite places in Hong Kong. I also went up to the famous Victoria Peak. I was very surprised that I had not once gone to it last semester. I like to think I made up for it later by going there 6 times in total within the space of 3 months. Then the Chinese New Year came, something I was really looking forward to. HKU gave us a week off in recognition of the holiday festival. Sadly, nothing much happened in Hong Kong for the Chinese New Year. I was expecting lion dances but due to Covid, it was all shut. Nonetheless, I had a great time, and I also received my first red envelope! Fun fact: These are very significant in the Chinese culture. They are often filled with money, or in my case sweets, and are a sign of good luck and happiness.

The conversations about leaving Hong Kong

By the end of the first week of February, I was not well. I initially thought it was due to food poisoning. But I later found out, after speaking to a flatmate who was also not well and other people in the same building, that my accommodation had a fault in their filtered water fountain. I happened to have drunk from it, which resulted in me throwing up 5 times in one day. In Hong Kong, I have thrown up more times than I have in my entire life, and that particular incident beats the record. 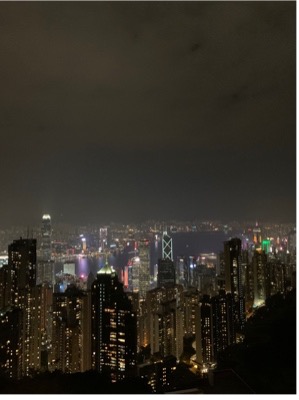 Whilst I was taking a break and trying to heal, conversations had started in the exchange community about leaving Hong Kong. When this was first mentioned in my presence, I was completely shocked. Like I said before, I never viewed the restrictions as bad and, as I have listed above, there was still so much one could do! I had determined that I would stick with my original plan and not leave until the end of May, when the semester ended.

As the weeks progressed, the talks continued. In fact, they were becoming more popular. The opening of any conversation would either be “are you leaving?” or “when are you leaving?”. It became a very dull environment. I sort of gave into that too. I found myself asking others the same questions. Most of my exchange friends were leaving, with a date in mind. For me, it felt like it was too soon. How does one deal with that, anyway? How can someone process that their exchange year has now switched to online, Covid cases are rising around them, new rules are being introduced weekly and all the people around them are leaving? I was still of the opinion that I will not leave just yet. I had, however, realised that I most probably won’t be in Hong Kong in May and that I’d leave before then. 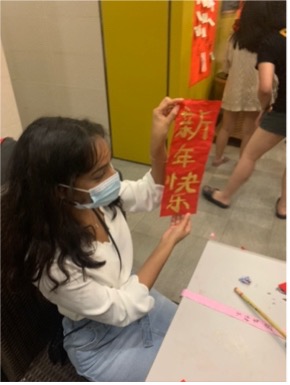 But everything started getting to me. What didn’t help was that we had received an email from our halls giving us the option to either leave and get the remaining money back or stay but follow their rules. Our halls had only given us 2 days to decide and 4 days to leave. The main issue for me was that I got very attached to Hong Kong. I became very comfortable. I enjoyed having my own space here and all the personal growth that I had done. The next few days consisted of people leaving the halls. There were suitcases everywhere. My roommate was also leaving and so were most of my hallmates. My exchange friends were getting closer to book their flights out of Hong Kong.

The thought of leaving amongst exchange students was never to go directly back home. It was to leave and travel. And for the majority of exchange students, that was to travel to Thailand. There’s even a WhatsApp group chat called the “Thailand Squad” which now has over 200 people. The whole “leaving to travel” didn’t appeal to me as much as it did to others. I was always going to travel after I had left Hong Kong anyway before going home. And I was in no rush to start it any sooner. Other people were keen on leaving just in time for reading week, to get a week to explore with no online lectures interrupting. Having said that, a minority of exchange students did go home after having left Hong Kong. But that was never on my agenda.

I am a very indecisive person when it comes to making decisions. I always think a lot about things before deciding, and even after deciding, I continue to overthink. Pros and cons lists do not work for me, especially not in this dilemma. Speaking to tons of people did not help either. I’d have days where I’d convince myself that I am not leaving only to wake up and think maybe I should leave. It got to the stage that I had gone to sleep having spoken to my mum, convinced myself to ignore what everyone else is doing and stay in Hong Kong only to wake up the next day determined to leave, thinking it was the right thing to do. But the universe was against it, literally. I had received three signs from the universe, and I ignored all of them. First, it was the very first time I had forgotten all my bank cards at home – I never do that. Second, my mobile banking app would not show my card details, it usually does show it. And finally, the airline website would not load on my MacBook. With a friend’s help, I booked the flight the following day.

Within an hour, I regretted it. I remember sitting on the floor of my dorm and thinking, “What on Earth have I done?”. I also briefly decided that if worse comes to worst, I will just not board the flight. That was the only commitment I had made so far. Yet, the very next day, I booked a hotel, which was even more of a financial commitment. The days following were an emotional disaster for me. Whilst my friends were packing their bags and sorting out travel plans, I was feeling very upset about leaving Hong Kong. It just did not sit right with me. I remember I kept asking myself whether I’m doing the right thing and what was the right thing. But at the same time, I was feeling extremely devastated about leaving, and sooner rather than later (although it was pretty late), I realised that all this time I just wanted to stay here, in Hong Kong. Once that self-realisation and acceptance occurred, I felt the happiest I had felt in that entire week, and I proceeded to cook a meal.