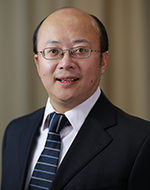 As a professor at Tsinghua University School of Law and the associate director of Tsinghua University Business Law Centre in Beijing, Xin Tang is recognized as one of the leading researchers on business law in China. Xin published widely in the fields of protection of securities market investors, fiduciary duties of the directors, senior managers and controlling shareholders, minority shareholder suits, merger and acquisition of the listed companies, legal liabilities of market wrongdoings. He is one of the members of the Editorial Advisory Board of “Business Laws of China” Series published by Thomson Reuters/West Press. Prior to joining Tsinghua's faculty in 2000, Xin was a research fellow and lecturer of law at Peking University Law School, where he was granted the Award “Excellent in Teaching”. He has also taught at leading universities as a visiting professor or an adjunct associate professor including the Radzyner School of Law, Interdisciplinary Center Herzliya (Israel) and Columbia University School of Law (US). Professor Tang served as a member of the Merger and Restructuring Review Commission of China Securities Regulatory Commission, an organization empowered by the securities market regulator in China to regulate the merger and acquisition of the public companies, he is now sitting in the Listing Board of Shanghai Stock Exchange, one of the biggest securities markets in the world.