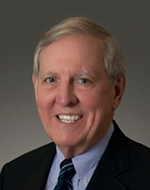 Edward has been practicing law for more than 35 years. He served in the Office of General Counsel of the Virginia State Corporation Commission from 1975-1980, leaving the Commission in 1980 as deputy general counsel. From 1980-1981, he was assistant general counsel for Duke Power Company. He joined the energy and environment group at a Richmond law firm as an associate in 1981, and became a partner in 1983. He has been with McGuireWoods since 1999. He retired as partner in 2010.

He has authored a number of articles on economic regulation; is listed in The Best Lawyers in America and Who's Who in American Law. He has served as a fellow for the Institute of Advanced Legal Studies in London; a Distinguished Senior Faculty Fellow at Virginia Commonwealth University's School of Education and School of Government Affairs; and a Distinguished Senior CIPP Fellow at George Mason University School of Law. He is currently a Senior Research Fellow at the Energy and Natural Resources Law Institute at Queen Mary University of London.