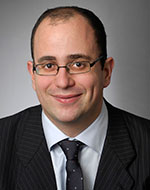 Pablo Figueroa is a Senior Associate at the Brussels office of Gibson, Dunn & Crutcher. He is a member of the firm’s Antitrust and Competition, Litigation and Public Policy Practice Groups.

Mr. Figueroa is a Visiting Lecturer at Queen Mary University (London, United Kingdom), a guest lecturer on Competition law at the Universidad de Deusto (Bilbao, Spain) and at the University of Oxford (United Kingdom). He is an editor of World Competition, Law and Economics Journal (Kluwer) and acts as a consultant for the European University Institute (Florence, Italy). His paper on “RPM Under EU Competition Law: Some Considerations from a Business and Economic Perspective” was awarded 'Best Business Economics Article - 2014' by the Antitrust Writing Awards 2014. Mr. Figueroa is ranked as a 'foreign expert in Spain' for Belgium: Competition/European Law by Chambers Global 2017, according to whom, Mr. Figueroa “frequently represents clients before the Spanish National Competition Authority”. Mr. Figueroa is also recommended for Belgium: EU regulatory - Telecoms by Legal 500 EMEA 2015.

Mr. Figueroa is a native Spanish and Galician speaker. He speaks English, French and Portuguese. He is admitted to practice before all Spanish Courts and Tribunals, the European Commission and the EU Courts. Prior to joining Gibson Dunn, Mr. Figueroa practised as an associate in the competition group of a Magic Circle firm.

Mr. Figueroa earnt his Master of Laws (LL.M.) in 2006 from Cornell University, and also his Belgium, Master of Laws in 2001 at the College of Europe. He attended Universidad de Deusto in Bilbao, Spain where he obtained his Law Degree in 2000.

For a complete list of my recent publications see: http://www.gibsondunn.com/lawyers/pfigueroa.