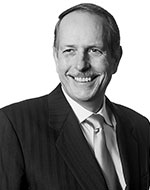 Lee C. Buchheit’s is a Visiting Professorial Fellow at the Centre for Commercial Law Studies (CCLS) and Partner at Cleary Gottlieb Steen & Hamilton LLP. His practice focuses on international financial transactions, including sovereign debt management, privatization and project finance. He is also a Visiting Professor at the University of Edinburgh Law School.

He is the author of two books in the field of international law and more than 40 articles on professional matters. The legal and business press repeatedly has recognized Lee for his work on behalf of clients and leading role in the profession, including the Financial Times, which named him on of its 10 most “Innovative Individuals” of 2012 for his work on the Greek debt restructuring; and the International Financial Law Review, which honored Lee with its inaugural Lifetime Achievement Award in 2010 for his contributions to international finance.