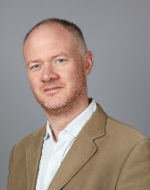 Professor Richard Ashcroft teaches medical law and ethics at both undergraduate and postgraduate level in the Department of Law at Queen Mary University of London.

Previously he was Professor of Biomedical Ethics in the School of Medicine and Dentistry, and before that he worked at Imperial College London, Bristol University and Liverpool University.

Professor Ashcroft won a share of a £850,000 Wellcome Trust Strategic Award in Biomedical Ethics. Read about the Centre for the Study of Incentives in Health [PDF 19KB] or visit www.kcl.ac.uk

He trained in History and Philosophy of Science at Cambridge University, completing a PhD thesis on ethics in scientific research, and subsequently was a Research Fellow in Philosophy at Liverpool University, Lecturer in Ethics in Medicine at Bristol University, and Lecturer (eventually Reader and Head of the Ethics Unit) at Imperial College London.  Before joining the School of Law, he was Professor of Biomedical Ethics in the School of Medicine and Dentistry. In 2005 he held an Australian Bicentennial Fellowship, visiting the Centre for Applied Philosophy and Public Ethics at the University of Melbourne. He is an honorary research fellow at the Centre for Ethics in Medicine, Bristol University and a fellow of the ETHOX Centre, Oxford University.

He is a Deputy Editor of the Journal of Medical Ethics, and serves on the editorial boards of a number of other journals, including Bioethics, Developing World Bioethics, Biosocieties, Health Care Analysis and Studies in History and Philosophy of Biological and Biomedical Sciences.  He is a member of the Ethics and Policy Advisory Committee of the Medical Research Council, Director of the Appointing Authority for Phase I Ethics Committees and a member of the Royal College of Physicians working party on tobacco.

School of Medicine and Dentistry

Professor Richard Ashcroft is interested in supervising PhDs in public health ethics, and in human rights and biomedicine.