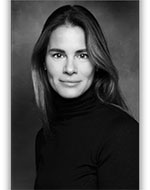 Camille’s study looks at the disconnect between the significant investment City law firms are putting into women lawyers’ career progression and the static advancement of female talent in private practice in the last decade. Her study focuses on men’s over-representation, rather than women’s under-representation in partnership and management of large City law firms.

Camille is a dual qualified Canadian (Ontario) and UK solicitor. She practiced corporate law at Allen & Overy for six years in both London and Paris. She then changed roles within Allen & Overy to become a senior corporate professional support lawyer. Since leaving private practice, Camille has worked for a UK non-profit organisation for which she remains trustee. More recently Camille was employed as researcher for the London School of Economics’ Commission on Gender, Inequality and Power.