The project is based on initial case study work by Professor Alan Dignam from the School of Law at Queen Mary University of London and Gabriela Quijano from Amnesty International. Researched and developed over two years with Menagerie Theatre Company and Queen Mary Drama, the centrepiece of the project contains three plays that make up the Human Rights! Bloody Human Rights! trilogy. The plays written by Professor Dignam follow the attempt of a fictional British Company (BEW PLC) to privatise a community well in India, and the consequences as they play out over three continents. 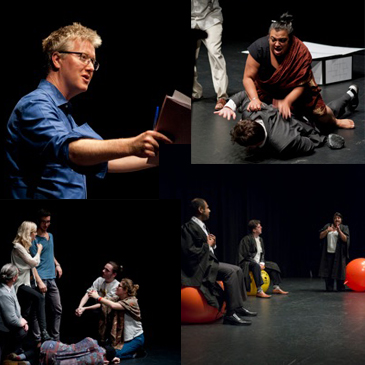 At the heart of the plays lie complex issues such as community engagement, water as a commodity or human right, public corruption, UK business and human rights policy, private power, corporate groups, law versus moral/ethical approaches and the problematic role of lawyers and international arbitration. The plays explore these issues by following the question of who is responsible for the death of a woman in India from events in Orissa, to London and then finally to Washington where we find that her death has been almost forgotten.

The plays were performed as an interactive forum theatre experience over two weeks in October 2013 in Belfast, Dublin, London and Cambridge. Over 500 members of the public attended, got involved in the issues, produced, then voted for 10 clear aims for future legislation to help solve key aspects of business human rights abuse. You can find out more about the project at www.humanrightsandbusiness.org.