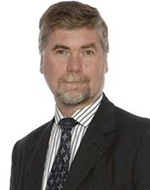 Conor is well known and respected within the IPMT market, with extensive knowledge of technology and technology law with particular expertise in payments systems and security and PKI technologies in the financial services sector. He has practised extensively in contentious and non-contentious aspects of computers and communications law, including advising on the outsourcing of IT and telecommunications operations, systems development and integration contracts (including call centre development projects) as well as acting for clients in various disputes involving failed development projects. He has handled major UK prosecutions under the Computer Misuse Act 1990 and worked on cases involving copyright theft and piracy issues. Some of his recent work includes advising on various significant IT disputes, advising a major bank on a material development project, and working on a variety of cloud computing arrangements.

Conor was a member of the firm's IPMT Steering Committee since its inception and he was Group Manager of the IPMT group in London until August 2013. He also was Hogan Lovells' client relationship partner for Fidelity Worldwide Investments, VocaLink and, prior to its acquisition by Microsoft, Skype. He was on the core team for various clients. He has consistently been listed as a leading technology lawyer in all the major legal directories (including Chambers, The Legal 500 and PLC), in many cases since their first publication.