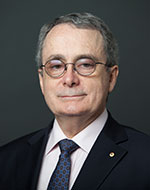 Outside of his academic commitments, Doug is a leading independent international commercial and investor/state arbitrator. He is an arbitrator member at Arbitration Place in Toronto, a door tenant at Atkin Chambers London, and has an office in Sydney, Australia. Prior to his full-time practice as an arbitrator Doug had 40 years' experience as an international transactional and disputes projects lawyer. The arbitrations in which he has been involved include infrastructure, energy, commodities, intellectual property, commercial and joint venture, and investor-state disputes spanning over 30 jurisdictions around the world. Doug is acknowledged as a leading arbitrator and is highly ranked in a number of leading publications. In 2016, Doug was made a Companian of the Chartered Institute of Arbitrators, and is one of only four living people in the world to have been bestowed with this honour.

More publications can be found at https://www.dougjones.info/publications/.