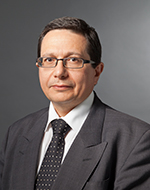 Professor Eugène Buttigieg is a Visiting Professor of Competition Law at Queen Mary University of London. He has been serving as a judge at the EU’s General Court in Luxembourg since 2012.

He holds the position of Associate Professor in European and Comparative Law at the University of Malta where he has enjoyed a distinguished academic career (since 1994)and is the holder of a Jean Monnet Chair in EU Law (since 2009). He has lectured at universities in Istanbul and Luxembourg. He has served in a number of positions in the Maltese public service, including as Senior Legal Officer at the Ministries of Justice and Foreign Affairs, Member of the Copyright Board, Board Member of the Malta Resources Authority and Legal Advisor on consumer and competition law to various Ministries as well as to the Malta Competition and Consumer Affairs Authority, apart from serving as a legal consultant on EU law in the private sector.