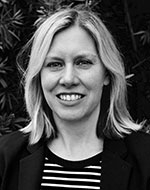 Dr Angela Sherwood’s research focuses on state violence and migration; environmental harms and displacement; the role of international organisations and corporations in migration governance; and the criminology of humanitarianism. She is currently a Postdoctoral Researcher working on her ESRC-funded project ‘Understanding Humanitarian Crime and Deviance in Global Chains of Harm Production,’ which is based on her doctoral fieldwork in Haiti. The project examines the responsibilities of state and non-state actors for land-related harms in Haiti and engages with inter-disciplinary conversations about criminal labelling and non-penal ways of sanctioning state/humanitarian crime. Angela’s work has appeared in the Journal of Refugee Studies and in several edited volumes on themes of crime, displacement, and international migration.

Angela previously worked as a Post-doctoral Researcher on the ERC-funded project Refugees are Migrants: Refugee Mobility, Recognition and Rights led by Cathryn Costello at the University of Oxford’s Refugee Studies Centre. Angela’s work under the project interrogated the legal obligations and accountability of international organisations operating within the global refugee regime, with a particular focus on the International Organization for Migration.

Prior to this, Angela worked for Amnesty International as a researcher and advisor on migrants’ rights where she led investigations on supply chain human rights abuse and provided expert analysis on the protection of migrant workers. Angela has also worked in humanitarian operations and policy development for the International Organization for Migration (IOM) at its headquarters in Geneva and at its offices in Haiti, East Timor, South Africa, Tunisia, Mongolia, and Zimbabwe. Between 2013-2015, Angela co-led two mixed methods studies on disaster displacement in Haiti and the Philippines for the Brooking Institution and IOM.

Angela holds a PhD in Law from Queen Mary and MSc in Criminology and Criminal Justice (Research Methods) from the University of Oxford. Her teaching has included seminars on state crime, disaster displacement, forced evictions and global migration governance.

Angela is currently writing her book Humanitarian Crime and is co-editing a volume on the International Organization for Migration (IOM) with Professor Cathryn Costello (Hertie School Centre for Fundamental Rights) and Professor Megan Bradley (McGill University).