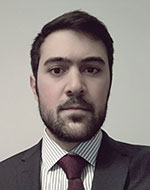 The technological developments and the proliferation of computers and communications has changed every aspect of the modern society with inevitable effects on the criminality of human behaviour. Despite its positive features, the internet also served as a new harbour for criminals who found this fortress of anonymity extremely attractive. This new environment has inevitably “influenced” the crime of money laundering. Infinite networks that allow instant transactions, transfers and conversions of real-world money to digital currency are few of the factors that render the fight against this type of money laundering tremendously challenging.

Andreas holds a Bachelor of Laws from the School of Law at the National and Kapodistrian University of Athens. Following that, he obtained a Master of Laws in Criminal Justice from Queen Mary University of London with a distinction (2017). Upon completion of the LLM, he was selected for a traineeship at the European Parliament, Brussels, Belgium and he was granted a Robert Schuman scholarship. Andreas returned to legal practise and worked for a criminal defence Law Firm in Athens, Greece and was admitted to the Athens Bar Association (2020). In September of 2019, Andreas joined the School of Law at Queen Mary University of London as a PhD candidate.