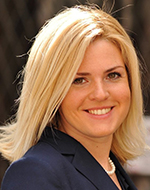 Till Leave to Remain Do Us Part? Marriages of Convenience and EU Free Movement Law: the Case of the United Kingdom

Since 2007, Aleksandra has been working as an investigative journalist specialising in legal matters and issues of international significance. Having completed her BA in Journalism at the University of Latvia in 2008, she went on to obtain the MA in European studies with specialisation in EU law (distinction) at the University of Latvia and the MA in Legal Linguistics (merit) at Riga Graduate School of Law in 2010. In early 2011, she published a book charting her journalistic account of Latvian citizens lured into marriages of convenience in Ireland and the UK. For her research, she was nominated as Latvia’s 2011 Trafficking in Persons Report hero by the United States Embassy to Latvia. Following this, she joined the teaching staff of the University of Latvia as a visiting lecturer, and embarked on her PhD studies at Queen Mary.

The transformation of the EU from an economic to a political community has manifested itself in the introduction of the EU citizenship, as well as creation of a general right to permanent residence for EU citizens and their family members. Yet, a number of Member States, including the UK, have expressed concerns about the 'undesirable consequences' of free movement, pointing to the perceived abuse of rights. In this context, the phenomenon of marriages of convenience is viewed as a significant problem by policy makers, particularly with regard to admission of non-EU family members of EU citizens.

The first part of the thesis aims to explore the concept of marriages of convenience in EU law in so far as it concerns the exercise of free movement rights by EU citizens and their family members. The second part will examine the regulation of the phenomenon in UK law, as well as observe the relevant developments following the Brexit vote.