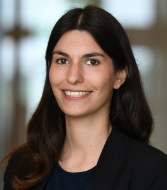 Dr Leila Ullrich joined Queen Mary in September 2019 as a Lecturer in Law. Previously, she was a British Academy Postdoctoral Research Fellow in Criminology at the Faculty of Law at the University of Oxford and William Golding Junior Research Fellow at Brasenose College.

Her research interests lie in the sociology and gender logics of international law and her current research examines the interplay between terrorism, counter-terrorism and gender through a comparative case study of the United Kingdom, Kenya and Lebanon.

In 2017, she received her PhD in Criminology at the Faculty of Law, University of Oxford which explored the interpretation, use and practice of ‘justice for victims’ and ‘gender justice’ at the International Criminal Court. She is currently writing up her monograph for publication with Oxford University Press.

Before starting her postdoctoral research, Leila worked as social stability analyst at the United Nations Development Programme (UNDP) in Lebanon. In this capacity she conceptualized, secured funding for and managed an Innovation Project ‘Speak your Mind to Prevent Conflict in Lebanon’, a qualitative WhatsApp survey of Syrian refugees and Lebanese host communities to better understand local conflict dynamics and needs.

She was also the Convenor of the Oxford Transitional Justice Research (OTJR) network and worked for the International Criminal Court.

Speak up via WhatsApp: A Qualitative WhatsApp Survey of Syrian refugees and host communities in Lebanon (with the United Nations Development Programme)

This research project grew out of my work as social stability analyst with UNDP in Lebanon. Working on the Syrian refugee crisis in Lebanon and particularly on social stability questions, I was frustrated by the lack of in-depth qualitative data and bottom-up approaches. To address this gap, I proposed and was awarded an innovation grant to develop a qualitative WhatsApp survey tool. In Lebanon, the use of WhatsApp is widespread with 78% of refugee households using it. And WhatsApp has the voice message function which allowed us to send survey questions as voice messages and more than a 1000 people participated in the survey sharing their stories and insights on wide-ranging topics such as their safety, needs, conflict dynamics, gender relationships and their vision of the future.

Empirically, the survey revealed that host community/refugee relationships are not well understood through generic national or confessional labels such as ‘Syrian’/’Lebanese’ or ‘Sunni’/’Christian’ but are mediated on the ground through gender, race, age and class but also neighbourly relationships, friendships and local politics. Methodologically, it demonstrated WhatsApp’s potential for significantly scaling up qualitative data, producing more inclusive, ‘real-time’ people-generated data that foregrounds their ideas and analysis, while relying on a form of communication that they are comfortable with.

Mind the Gap: Exploring the Interplay between Gender, Terrorism and Counterterrorism

Women have become difficult to ignore in terrorism yet attempts to consider them in counter-terrorism are rare and efforts to integrate a gender perspective even rarer. To close this gap, this project addresses two questions: first, how do terrorist and counter-terrorist institutions conceptualize women and with what effect on them? Second, how do women make sense of their role vis-à-vis both terrorist and counter-terrorist institutions? These questions will be explored through a comparative case study of the United Kingdom, Kenya and Lebanon.

I welcome prospective doctoral researchers who want to work on issues related to international criminal justice, transitional justice, victimology, feminist theory, terrorism and counter-terrorism, migration and global knowledge production. If interested, please contact me with a CV and short summary of your proposed project.