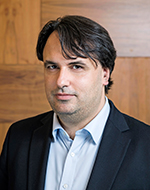 Valsamis Mitsilegas is Professor of European Criminal Law and Global Security, Director of the Criminal Justice Centre and, since 2018, Deputy Dean for Global Engagement (Europe) at Queen Mary University of London. He is also a member of the leadership team of the Queen Mary Global Policy Institute. He has served in a number of senior leadership roles at Queen Mary, including as Head of the Department of Law (2012-2018), as Dean for Research for the Humanities and Social Sciences (January-December 2017) and as Academic Lead for Internationalisation with pan-university responsibilities (2017-2018). He was the Inaugural Director of the Queen Mary Institute for the Humanities and Social Sciences and is currently chairing the interdisciplinary IHSS Working Group on responses to Covid-19.

His research interests and expertise lie in the fields of European criminal law; migration, asylum and borders; security and human rights, including the impact of mass surveillance on privacy; and legal responses to transnational crime, including organised crime and money laundering. He is the author of seven monographs and over 150 articles and chapters in academic volumes. He has held a number of visiting positions in leading institutions including Visiting Professor at the Universities of Geneva (2015), Louvain (UCL-2017), the Sorbonne (2018), Bologna (2019), Uppsala (2019), ULB (2020), Copernicus Visiting Scientist at the University of Ferrara (2015) and Fernand Braudel Senior Fellow at the EUI (2019). Professor Mitsilegas has had a leading role in the establishment and development of a number of transnational research networks. He is Co-Coordinator of the European Criminal Law Academic Network (ECLAN) and a member of the Management Board of the International Research Network on Migration and Crime (CINETS). He has been Principal Investigator, Co-Investigator or member of research networks in more than 30 funded research projects, including from the European Union, the ESRC, the Leverhulme Trust and the Open Society Foundation. He is founding General Editor of the Hart Studies in European Criminal Law, of the Queen Mary-Renmin Series on Comparative Criminal Justice Issues in China and Europe and of the Brill Research Perspectives in Transnational Crime. He is also General Editor of the New Journal of European Criminal Law and the Brill series on Immigration and Asylum Law and Policy in Europe.

Professor Mitsilegas is actively involved in collaborative projects with think-tanks, civil society and NGOs. He is a member of the Research Advisory Group of the Howard League for Penal Reform and was guest editor to the Open Democracy week on Surveillance and Privacy in 2016. He has a long-standing cooperation with the Centre for European Policy Studies, resulting in the publication of a number of joint reports on Brexit and on Digital Evidence and Digital Justice (Report on Access to Electronic Data by Third-Country Law Enforcement Authorities and Report on Cross-Border Data Access and the Future of Digital Justice). He has made regular media appearances including on BBC Radio 4, and in the Times Higher Education Supplement, the New Statesman and the New York Times.

Professor Mitsilegas welcomes proposals for postgraduate research in the fields of EU law in general and EU Justice and Home Affairs law in particular, security, terrorism and human rights, and law and transnational crime (including organised crime and money laundering).