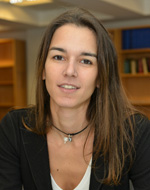 Lecturer in Shipping and Insurance Law

She trained and qualified as a Solicitor of the Supreme Court of England and Wales (2008) and is a Member of the Law Society and the Athens Bar Association. She is a Supporting Member of the London Maritime Arbitrators Association (LMAA) and may from time to time accept appointment as arbitrator.

Tina has worked both in private practice in London as a corporate and commercial solicitor and as in-house General Counsel for an international shipping company (based in Piraeus, Greece). She has also worked in-house for a major International Group P&I Club (based in London).

Her current research focus is on the operation and practice of P&I Clubs, piracy and specialized piracy arbitration, and the marine insurance cover afforded to damage caused to coral reefs as a result of maritime collisions, groundings and pollution.

Tina welcomes students in all areas of her expertise and current research interests.