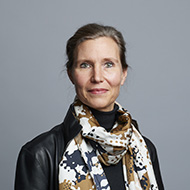 Dr Saskia Hufnagel is a Reader in Criminal Law and Co-Director of the Criminal Justice Centre (CJC) at Queen Mary University of London. She previously worked as a Research Fellow at the Australian Research Council Centre of Excellence in Policing and Security, Griffith University, Australia, and was a Leverhulme Fellow at the University of Leeds. During the completion of her PhD she taught at the ANU College of Law and between 2009 and 2011 she held a permanent teaching position at the University of Canberra.

Her main research areas encompass law enforcement cooperation in Asia, Australasia, the EU and North America, comparative constitutional and human rights law with a focus on terrorism legislation and the policing of art crime.

In 2015 Saskia was awarded an AHRC Networking Grant (together with Professor Duncan Chappell, University of Sydney) to fund a workshop series and Handbook Publication (Palgrave Macmillan) on ‘Art, Crime and Criminals: Painting Fresh Pictures of Art Theft, Fraud and Plunder’.

Saskia has published a number of articles as a result of her research as a Leverhulme Fellow at the University of Leeds. This research focuses on UK involvement in EU police and justice cooperation and in particular the possible benefits and downsides of a UK opt-out with regard to the Lisbon Protocol 36. The research was extended to the security implications of the Brexit for the UK and the EU in 2016.

Together with Duncan Chappell she has edited Contemporary Perspectives on the Detection, Investigation and Prosecution of Art Crime (Ashgate, 2014). The edited collection is a result of a workshop grant she obtained at Griffith University in 2011. The book is available as paperback from January 2017.