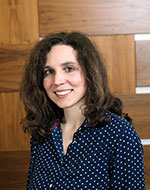 Iris Benöhr is a Senior Lecturer in Law at Queen Mary University of London. Prior to Queen Mary she was a British Academy Postdoctoral Fellow at the University of Oxford. She holds a PhD and Master in law (European University Institute, Florence) and a Licence en Droit (University of Neuchâtel, Switzerland). She was admitted to the Bar, Zurich (Switzerland) and held positions at the United Nations and the European Commission.

Her main research interests lie in international, European and comparative law, in particular financial market regulation, consumer law, dispute resolution, human rights, competition law and sustainable development. She published widely in these fields and has worked as a legal expert for related projects commissioned by the United Nations and the Swedish Government on international and comparative financial services law and dispute resolution.

British Academy funded project on the comparison and intersection of consumer and environmental law.