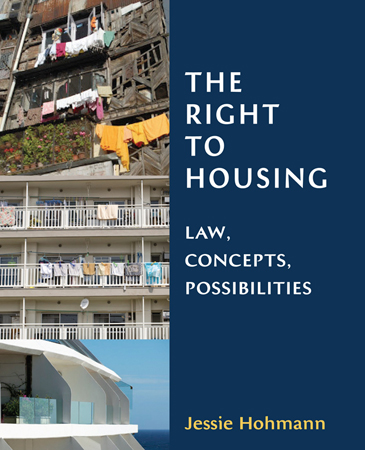 Dr Jessie Hohmann's book 'The Right to Housing: Law, Concepts, Possibilities' was published by Hart on 1 March 2013. The book will be launched on 7 March 2013 with a panel presentation on 'Right to Housing' from Dr Hohmann, John Gallagher, Jamie Burton and Professor Van Bueren.

Dr Hohmann took up a lectureship with Queen Mary in September 2012, after completing a British Academy Post-Doctoral Research Fellowship at the Lauterpacht Centre for International Law, University of Cambridge. Her new book represents a major contribution to the scholarship on an under-studied and ill-defined right. In terms of content, it provides a much needed exploration of the right to housing. In approach it offers a new framework for argument within which the right to housing, as well as other under-theorised and contested rights, can be reconsidered, reconnecting human rights with the social conditions of their violation, and hence with the reasons for their existence.