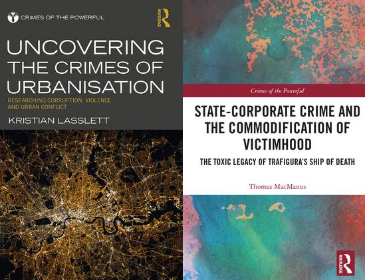 Join Professor Kristian Lasslett (University of Ulster) and Dr Thomas MacManus (Queen Mary University of London) for a double book launch of the Crimes of the Powerful series. Lasslett and MacManus will introduce their new monographs and highlight elements of the toxicity of capitalism.

The evening will highlight the role which a lawless class of global commodity speculators, based in some of the wealthiest countries in the world, play in delivering mass social harm to communities on the peripheries of the global political economy. These findings are grounded in intimate on-the-ground forensic investigations, which have independently uncovered a vast range of illicit activities. Lasslett and MacManus both paint an ambiguous portrait of civil society; often framed as a buttress against injustice, their research uncovers startling data that implicates civil society organisations and human rights activists in the crimes of the powerful.

A drinks reception will follow for those in attendance.

Uncovering the Crimes of Urbanisation by Kristian Lasslett: From the social cleansing of cities through to indigenous land struggles at the frontline of extraction megaprojects, planetary urbanisation is a contested process that is radically shaping social life and the sustainability of human civilisation. In this pioneering intervention, it is maintained that this turbulent planetary process is also a potent space for state–corporate criminality. Market manipulation, fraud, corruption, violence and human rights abuses have become critical spokes in the way space is being transformed to benefit speculative interests. This book not only offers investigative data that documents in detail the intricate ways state and corporate actors collude to profit from the built environment; it also establishes the tools for building a research agenda that can interrogate the crimes of urbanisation on a comparative, longitudinal basis. The author sets out an investigative methodology which can be appropriated to conduct probing research into the hidden schemas and forms of collusion that buttress state–corporate criminality in the urban sphere. Coupled to this, a theoretical framework is developed for thinking about the networks, processes and mechanisms at the heart of property market manipulation, and the broader social relationships that sustain and reward illicit speculative activity. This book concludes that researchers and civil society have a critical role to play in challenging a historical form of planetary urbanisation, marked by endemic state–corporate criminality, that poses significant threats to the sustainability of lived communities and the rich biospheres that they depend upon.

State-Corporate Crime and the Commodification of Victimhood highlights the continuing impunity enjoyed by corporations for large scale crimes, and in particular the crime of toxic waste dumping in Ivory Coast in 2006. It provides an account of the crime, and outlines contributory reasons for the impunity both under the law and from a criminological point of view. Furthermore, the book reveals the retrogressive role of civil society organisations (CSOs) in Ivory coast, contrary to the societal expectations made of 'non-governmental' organisations (NGOs) and CSOs.

Kristian Lasslett is Professor of Criminology at the University of Ulster, and sits on the Executive Board of the International State Crime Initiative. He is joint Editor-in-Chief of State Crime Journal, and Editor of The State Testimony Project, the first online casebook for state crime studies.

Thomas MacManus is a Research Fellow and concentrates on the crimes of the powerful. He is based at the International State Crime Initiative (ISCI, statecrime.org) in the Department of Law at Queen Mary University of London (www.law.qmul.ac.uk/). He is admitted as an Attorney-at-Law (New York) and solicitor (Ireland). He is an editor in chief of State Crime Journal.

The Routledge Crimes of the Powerful Series, edited by Gregg Barak (Eastern Michigan University), Penny Green (Queen Mary University of London) and Tony Ward (Northumbria University) encompasses the harmful, injurious, and victimising behaviours perpetrated by privately or publicly operated businesses, corporations, and organizations as well as the state mediated administrative, legalistic, and political responses to these crimes. The series draws attention to the commonalities of the theories, practices, and controls of the crimes of the powerful. It focuses on the overlapping spheres and inter-related worlds of a wide array of existing and recently developing areas of social, historical, and behavioural inquiry into the wrongdoings of multinational organizations, nation-states, stateless regimes, illegal networks, financialization, globalization, and securitization.