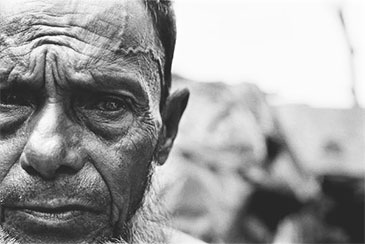 The International State Crime Initiative (ISCI) will be hosting a week of events, talks, film and photography with the aim of drawing attention to the ongoing genocide against the Rohingya, a people the UN has described as one of the world’s most persecuted minority. The week’s events feature renowned photographer Greg Constantine, Al Jazeera, and leading experts from the field including former UN Special Rapporteur for Human Rights in Myanmar, Tomás Ojea Quintana.

Our first event will launch a photography exhibition by internationally renowned photographer, Greg Constantine. His work represents a powerful and timely artistic intervention on the plight of the Rohingya, capturing the deep and ongoing suffering of a people who have, quite simply, nowhere to go. Based on his new book project, Exiled to Nowhere: Burma’s Rohingya, this exhibition explores the themes of statelessness, belonging, and citizenship.

Our second event will launch the ground-breaking report 'Countdown to Annihilation: Genocide in Myanmar' written by ISCI scholars: Professor Penny Green, Dr Thomas McManus, and Alicia de la Cour Venning. The report provides compelling evidence of a coordinated, State-led plan of genocide against the Rohingya. The report is based on ISCI scholars’ unprecedented systematic field research in Myanmar. The launch of the report will be accompanied by a panel discussion with:

Our third and final event will host the UK documentary premiere of Genocide Agenda by Al Jazeera, investigating the genocide against the Rohingya. The evening will feature a Q&A with the film’s Director, Phil Rees (Investigations Manager at Al Jazeera’s Investigative Unit (TBC)), Professor Penny Green (Director of ISCI and Professor of Law and Globalisation, QMUL) and more!

ISCI is hosting a series of events and talks with the purpose of raising the profile of the marginalised Rohingya, a people the United Nations has described as one of the world’s most persecuted minority.

Rohingya have been forced to flee the region in the tens of thousands, via dangerous sea routes, during which they experience severe physical and psychological abuse by human traffickers. The mass exodus of Rohingya is a direct result of the violence and systematic policies of persecution implemented by the Myanmar state against them. ISCI argues that the Myanmar state’s historic and ongoing persecution of the Rohingya amounts to genocide. The severe violence, discrimination, and destitution the Rohingya experience on a daily basis in Myanmar means that many feel as though they have no option but to flee.

At a time when this crisis shows no signs of abating, and the international community’s response remains woefully inadequate.