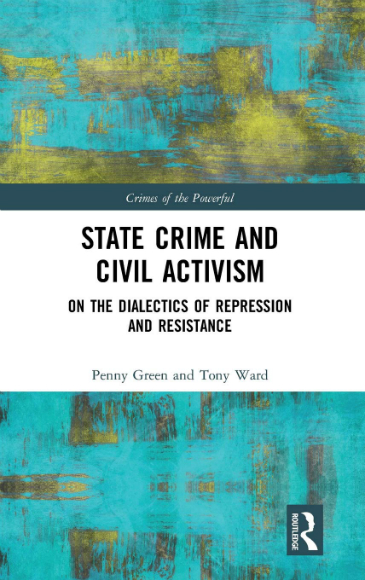 The International State Crime Initiative and the School of Law are delighted to host the launch of 'State Crime and Civil Activism on the Dialectics of Repression and Resistance' with Professor Penny Green and Professor Tony Ward at Queen Mary University of London.

State Crime and Civil Activism explores the work of non-government organisations (NGOs) challenging state violence and corruption in six countries – Colombia, Tunisia, Kenya, Turkey, Myanmar and Papua New Guinea. It discusses the motives and methods of activists, and how they document and criticise wrongdoing by governments. It documents the dialectical process by which repression stimulates and shapes the forces of resistance against it.

Drawing on over 350 interviews with activists, this book discusses their motives; the tactics they use to withstand and challenge repression; and the legal and other norms they draw upon to challenge the state, including various forms of law and religious teaching. It analyses the relation between political activism and charitable work, and the often ambivalent views of civil society organisations towards violence. It highlights struggles over land as one of the key areas of state and corporate crime and civil resistance. The interviews illustrate and enrich the theoretical premise that civil society plays a vital part in defining, documenting and denouncing state crime. They show the diverse and vibrant forms that civil society takes in a widely varied group of countries.

This book will be of much interest to undergraduate and postgraduate social science students studying criminology, international relations, political science, anthropology and development studies. It will also be of interest to human rights defenders, NGOs and civil society.

Penny Green is Professor of Law and Globalisation and Head of Department at Queen Mary University of London (QMUL). She has published extensively on state crime theory (including her monograph with Tony Ward, State Crime: Governments, Violence and Corruption), state violence, ‘natural’ disasters, genocide, mass forced evictions and resistance to state violence. She has a long track record of researching in hostile environments and has conducted fieldwork in the UK, Turkey, Egypt, Kurdistan, Palestine/Israel, Tunisia and Myanmar. She is Founder and Co-Director of the award winning International State Crime Initiative (ISCI). Her seminal works, with ISCI colleagues Thomas MacManus and Alicia de la Cour Venning, on the Rohingya genocide, Countdown to Annihilation: Genocide in Myanmar (2015) and Genocide Achieved, Genocide Continues: Myanmar’s Annihilation Of The Rohingya (2018), have drawn widespread global attention.

Tony Ward is Professor of Law at Northumbria University. He became interested in state crime and civil activism through working for INQUEST, a British NGO concerned with deaths in custody. In addition to state crime he writes and teaches on the law of evidence, legal history, jurisprudence and law and literature.

This event will be followed by a drinks reception.