We have taken the decision to cancel the upcoming Dispossession Film Screening and Panel event on Wednesday 28 February at Queen Mary University of London's Great Hall due to ongoing strike action by the University and Colleges Union. All ticket holders will receive a full refund for their tickets. We thank you for your understanding of this decision and support of the event, we are looking to reschedule the Dispossession Film Screening and Panel event later in the year.

In 2017 housing rose to the top of the British political agenda for the first time in a generation. But despite the media spotlight, few stories examined the catastrophic long-term failures that resulted in a chronic shortage of social housing in the United Kingdom.

Following on from our #QMULGrenfell events, the International State Crime Initiative (ISCI) at Queen Mary University of London School of Law will host a screening of Dispossession: The Great Social Housing Swindle followed by a panel discussion in the People's Palace Great Hall.

A limited number of free tickets for individuals facing financial difficulty are available. If you would like to request one of these, please e-mail lawevents@qmul.ac.uk. 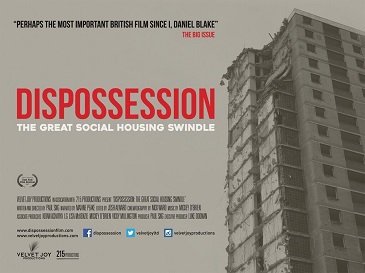 Dispossession: The Great Social Housing Swindle explores the agenda behind the neglect, demolition and regeneration of council estates in the UK over the past thirty years. The film reveals how individuals and communities are fighting against the state and private developers, as they try to save their homes from demolition, while investigating the decisions that turned a crisis into a tragedy.

Dispossession is the story of people who know that housing is not an expensive luxury, but a fundamental human right.

Click here to find out more about the film and director.

A panel discussion and Q&A will take place after the screening. The panel will be chaired by Dr Daniela Nadj. Our panel includes:

Paul Sng | @sng_paul | Director and producer of Dispossession, Paul Sng’s work focuses on telling the stories of people who challenge the status quo. Following the success of the documentary Sleaford Mods- Invisible Britain. Paul formed Velvet Joy Productions, an independent studio based in Brighton in 2015. His documentary about the failures and deception behind the social housing crisis, Dispossession: The Great Social Housing Swindle was released in 2017 and it has been screened around the country.

Antonio Roncolato | Antonio was a resident of Grenfell Tower having lived there since 1990. He works as a restaurant manager in a West London hotel. He has made regular media appearances over the past months, where he has spoken about the stress and discomfort the community is experiencing in the aftermath of the fire.

Anna Minton | Anna is a writer, journalist and Reader in Architecture at the University of East London. In 2017, she published the critically acclaimed book Big Capital: Who is London for? about the nationwide housing crisis.

Dr Lisa MacKenzie | @reddrumlisa | Lisa is a Lecturer in Sociological Practice at Middlesex University. The author of Getting By: Estates, Class and Culture in Austerity Britain (2014), she is also a regular campaigner on social housing issues.

Yvette Williams | @officialJ4G |
Yvette is a Campaign Coordinator for Justice4Grenfell (J4G), a community-led organisation focused on the long term goal of obtaining justice for the bereaved families, survivors, evacuated residents and the wider local community.

Dr Victoria Cooper | Victoria is as a Lecturer in Social Policy and Criminology at the Open University. Her research focuses on homelessness in relation to: housing, hostels, the criminal justice system, community punishment, geographical displacement and evictions. She is co-editor (with Prof David Whyte) of 'The Violence of Austerity' (2017, Pluto Press).

Siân Berry | @sianberry | Sian is a Green Party politician and campaigner, currently focused on making the Mayor’s housing policies better. She has been a local councillor in the Highgate ward of Camden since 2014 and was one of the Green Party’s Principal Speakers from 2006 to 2007. On the Assembly, Sian chairs the Housing Committee, and sits on the Oversight and Budget and Performance Committees, scrutinising the work of the Mayor and the overall budget for London.

Joe Delaney | @joedafoneUK | Joe is a resident of the estate near Grenfell Tower, and has been a very vocal activist for the victims, their families and other affected residents of the Lancaster West Estate. He has advocated on behalf of the Grenfell Action Group and is currently on the Committee of the Lancaster West Residents Association.

Dr Paul Watt | Paul is Reader in Urban Studies at the Department of Geography, Birkbeck, University of London. He has published widely on social rental housing, urban regeneration, the London housing crisis, homelessness, gentrification, and the London 2012 Olympic Games. Paul is co-author of Understanding Social Inequality (Sage, 2007), and co-editor of two recent books: Social Housing and Urban Renewal: A Cross-National Perspective (Emerald, 2017), and London 2012 and the Post-Olympics City: A Hollow Legacy? (Palgrave Macmillan, 2017).

Pilgrim Tucker | @PilgrimTucker | is a community organiser and campaigner who supported the Grenfell Tower Residents campaign, the Grenfell Action Group.