A personal experience of living in halls 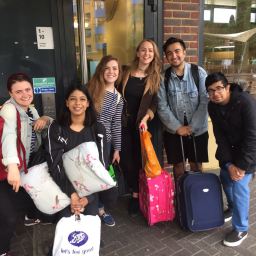 Living in halls is one of those unique university experiences that’s pretty hard to replicate anywhere else. You’re thrown in, head first, with up to 8 other strangers (I was in Fielden House on campus and there were 9 of us to a flat!). You’ve never met, might not even be studying the same course, but you’ll suddenly have to pal up and figure out how to live together. Living in halls was one of my favourite parts of my uni experience. I met some of my very best friends there, and made some really very hilarious memories.

You’ll definitely have a mixed bag, regardless of where or who you’re living with. Those ’10 types of people you’ll live with in halls’ posts aren’t entirely wrong – there are definitely some stereotypes that are regularly fulfilled. You might not love every person you live with, but if you can get past mini grievances about who last bought washing up liquid or who ate your delicious extra mature cheddar, you should be okay.

I remember my moving-in weekend being a really mad combination of stress, excitement and nerves. I was moving up to London, on my own, with no idea what to expect – it’s scary stuff! Moving in all my worldly possessions was a bit of a blur but I definitely remember my mum crying far too much when it came to goodbyes. Then, you’re on your own! I think it’s better to boot the parents back home early and then get yourself settled. I ran up and down my new corridor knocking on everyone’s doors to introduce myself. Maybe don’t be entirely as boisterous as I was but definitely go say hi, introduce yourself, and see if anyone wants to suss out where the nearest Sainsbury’s is.

A few weeks in and you’ll be an old hand. You’ll figure out your space, your friends and how you want to live. Revel in the independence! I just remember absolutely loving the freedom to come and go as I pleased. You can quite literally do what you want; from sitting in your pants all day to eating cereal for dinner six days on the trot (I will wholly admit to doing the latter). If you’re living on campus, your halls are a fantastic bolt-hole for those pesky two-hour gaps between lectures. I was definitely guilty of a mid-afternoon snooze between classes! Make the most of it, but get into a good routine too. I have some top tips below for you on making it work:

So, good luck! Make the most of it, say yes to things, and cherish the time because it will fly by. Halls is just such a fun and mental experience; the parties, freedom and close social contact make some really fantastically hilarious memories.