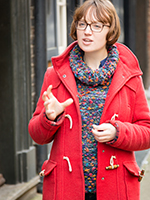 My PhD aims to look at the ways that new urban spaces were imagined, conceived and represented in London in the interwar period, and how children’s play and play space interacted with projects of slum clearance and building a new metropolitan space. I will explore the extent to which different cultural forms, including children’s comics and magazines, documentary photographs, autobiography and film, offered the possibility of change to urban public spaces through their engagement with children’s play.

I am jointly supervised by the Schools of Geography and Languages Linguistics and Film.