The Post-Wage Economy: Why we need to re-theorise ‘work’ beyond the wage

What is ‘work’? What does ‘work’ mean to people in different regions of the world? How might we assess the value of different forms of work? Are we headed towards a future without work? 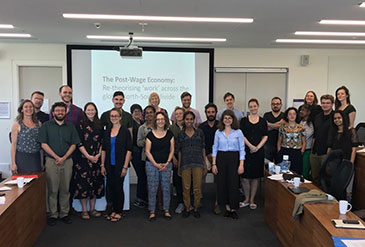 Attendees of "The Post-Wage Economy: Why we need to re-theorise ‘work’ beyond the wage" workshop, June 2018.

The idea of wage labour has been at the centre of understandings of social status, economic security and political rights in the global North for the past century. It has dominated attitudes towards governance and regulation and driven assumptions about how economy and society should function. However, recent transformations in the social and spatial organisation of production has led to the decline of wage labour in Europe and North America, associated with the rise of the ‘gig’ economy. For example, the fastest-growing form of work in the UK is part-time self-employment, represented by the growing army of ‘riders’ providing ‘services’ for digital transport and delivery applications.

The decline of stable employment in Europe and North America has invited the suggestion that experiences of work in the global North are becoming more like those in the global South – or majority world – rather than the other way around. Nevertheless, researchers and policy makers have continued to promote conventional ideas of waged work, foreclosing alternative theories based on the experiences of people in different regions of the world.

In June 2018 William Monteith, Olivia Vicol and Philippa Williams hosted researchers at a workshop in the School of Geography to re-theorise ‘work’ within and beyond the global North. The aim of the workshop was to examine the value of ‘work’ from a diversity of geographical locations and disciplinary contexts.

‘It was a fantastic couple of days in which researchers provided insights into a range of debates on the refusal of work, the relationship between work and care, and the future of work on digital platforms. Presenters drew upon a new vocabulary of work that included acts of ‘clicking’ (Gershon), ‘hustling’ (Thieme), and ‘infrastructural care’ (Calafate-Faria).

It really was one of the most intellectually stimulating events I've been to for ages and absolutely struck the really key debates that I think need to happen in this area, but that I don't see being fully developed elsewhere (or at least, anywhere that I am aware of!)
Dr Kate Hardy, University of Leeds

The workshop organisers look forward to building on these discussions through a series of future collaborations. If you would like to know more about this work, or join the Post-Wage Economy network please get in touch with William Monteith.