PhD student set to embark on a mammoth journey

Charlotte Wrigley is a PhD student in the School of Geography at Queen Mary University of London. Her research focuses on the Anthropocene, biopolitics, multispecies engagement, de-extinction, apocalyptic imaginaries and geologic time. She is about to embark on a long journey to Chersky, a remote arctic settlement in the Sakha Republic in North-East Siberia to conduct fieldwork for her research.

“My research engages with the understanding that we are now living in a new geological epoch – the Anthropocene – where humans are altering earth processes and are the main drivers of global warming,” says Charlotte.

“Various redemptive strategies have been proffered to reverse the catastrophic effects of anthropogenic climate change. One of these strategies is the restoration of the prehistoric mammoth steppe ecosystem in North-East Siberia, alongside the rewilding of Pleistocene megafauna and eventually the mammoth itself through the controversial science of de-extinction. The permafrost, which covers 65% of Russia, contains vast reservoirs of carbon dioxide and methane which are released when the soil thaws and exacerbate global warming. The role of the mammoth would be to trample down the soil to maintain its frozen state, thus keeping the greenhouse gases encased in ice.

“The revival of the mammoth and its role in planetary redemption forms part of an Anthropocene imaginary. Through my project, I aim to consider both the geologic forces of permafrost thawing and refreezing, and the biopolitical processes of de-extinction and rewilding that create and sustain life. By attending to the socio-material properties of melting, I will examine just what is revealed and made visible by permafrost thawing – both literally and figuratively – and consider the shifting configurations of frozen life in a warming world. 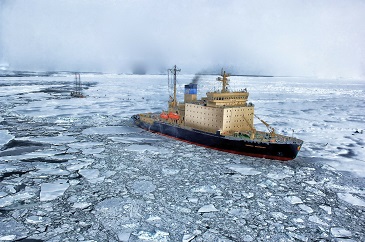 “Chersky today has a population of less than three thousand people – a huge, almost overnight, slump from its Soviet-era heyday as a bustling port town in the Arctic Circle,” writes Charlotte on her blog which she will use to document her fieldwork. “Ice breakers would dock here on their way to Vladivostok, and although life was hard, goods would show up on a relatively regular basis. Barges laden with gold and diamonds would snake down the Kolyma River; the abundant mineral deposits in this small part of the world once employed over a thousand people in the Chersky mines. Now there are no jobs, very few supplies, and a deafening silence from Moscow.

“But Chersky was built on Russia’s darkest deed. The gold mines that proved so lucrative to the Soviet Union were dug by prisoners, shipped in chains up the river to some of the harshest landscapes and climates in the world. There they were forced to dig mines, build camps and lay roads. These gulags sprung up in Siberia (and elsewhere in Russia) throughout the 1930s, and their particularly brutal brand of forced labour continued into the 1950s, and occasionally beyond. Many Siberian villages sprung up as a result of proximity to a camp; indeed, Chersky itself began as Nizhniye Kresty, a gulag that exists now only as dust, the town it birthed seemingly not far behind.

“Chersky may yet experience a resurrection of sorts. A few kilometres from the town, the disused TV building has found new life in an Arctic science station. It is here that scientists travel from other parts of Russia and beyond to monitor the tundra: a biome characterised by deep permafrost, marshy lakes and stunted vegetation. Despite being found in the farthest reaches of the globe, the permafrost fulfils an important planetary role through its very state of being frozen. Permafrost currently sequesters double the amount of carbon found in the atmosphere. If this carbon were to escape in the form of greenhouse gases – say, if the permafrost were to start melting – we’d be in deep trouble.

“If you walk through Chersky today, you’d see plenty of cracked and lurching buildings. This isn’t merely the complete lack of infrastructural upkeep afforded to this forgotten place, but an effect of thawing permafrost causing the foundations of buildings to buckle. A few hundred miles away near the town of Batagay, a sinkhole has opened up to such a depth and size that locals have dubbed it ‘the doorway to the underworld’. Further north on the Yamal peninsula, an unseasonably warm summer exhumed a long-dead reindeer riddled with preserved anthrax which then infected the local community. The permafrost is melting, certainly. But what, if anything, is to be done?

“Could the answer lie in Chersky, beneath the sludgy, yielding ground? Attached to the science station is an experimental rewilding project called the Pleistocene Park which aims to restore the prehistoric ‘mammoth steppe’ ecosystem. The owners, father and son Sergey and Nikita Zimov, believe that this ecosystem played an important role in keeping the permafrost frozen; by supporting an array of large herbivores, including the woolly mammoth, the heavy tread of these animals compacted the frozen ground and created an insulating effect. Their plan, crazy as it might seem, is to populate the sparse landscape with these megafauna once more, and perhaps to stem the worrying trajectories of permafrost thaw. As the frozen carcasses of mammoths with preserved DNA are found at an increasing rate, the Zimov’s hope that one day they might see a mammoth roaming the tundra again through the resurrection technology ‘de-extinction’.

“It is the Pleistocene Park that brings me from my Hackney attic to halfway across the earth. Chersky sits at the locus of intersecting temporalities; the deep time of the prehistoric ecosystem meets the more shallow history of Soviet brutality. The Pleistocene Park orients itself towards a better future – a sort of planetary redemption to save humans from an apocalypse of our own making. These are the anxieties of the Anthropocene, where certain pasts are harnessed as mitigating strategies, and other pasts are buried deeper into the ground. But the thawing permafrost reveals and alters, what was once preserved returning to the present day in strange and unpredictable ways. Centuries-old mammoth genetic material might provide a solution to escaping greenhouse gases, but the slumping ground and the ancient virions seeping from the soil might have other ideas.

“It is these conflicts and frictions – this complete mess – that I aim to interrogate here. I will spend just under a month living out here at the science station, watching the landscape shift from the brutal cold of winter into the tentative warmth of an arctic summer. A herd of baby bison will have been flown from Alaska and released into the Park. Other animals – musk oxen, wild horses, sheep – will be navigating the marshy soils. The mosquitoes will emerge from their pupae in swarms. The rivers will be teeming with sturgeon. It will be an environment I have never experienced before and I don’t really know what to expect. I guess that’s the point. Whatever happens, this small part of the planet carries with it enormous weight, whether that be its past, its future, or a huge hairy mammoth.”