The School of Geography at Queen Mary University of London (QMUL) recently hosted Professor Maristella Svampa, a renowned sociologist from Argentina, for a public talk and research seminar with graduate students. On Wednesday 25 April she gave a talk to a packed out lecture hall, which included students and staff from across the university, scholars visiting from other institutions and a number of civil society actors interested in Professor Svampa’s analysis of Latin America. 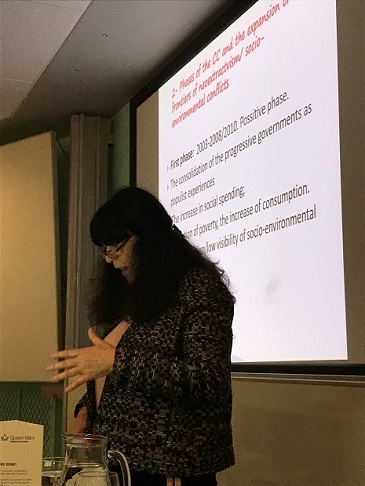 Maristella Svampa is a leading public scholar from Latin America. Based at the National University of La Plata and Argentina’s CONICENT, she is a sociologist, originally trained as a philosopher, and a highly prolific writer. At once daring, original and provocative, across her career she has examined a range of pressing issues including: the rise of grassroots activism and social movements in the period of Argentina’s 2001 crisis; the growth of inequality under neoliberalism and its consequence on urban society in Argentina; and the relationship between popular power and political regimes in Latin America.

In recent years she has developed international recognition for her work on modes of development in Latin American in which she has elaborated a particular interest and critique of the heavily reliance on extractivism by progressive governments. In 2016 she published one of her most impressive books to date, entitled Latin American Debates: Indianism, development, dependency and populism in which she explores the intersections of intellectual and political life in Latin America during the twentieth and twenty first centuries, in turn providing a critical analysis of the key political debates facing Latin America today. 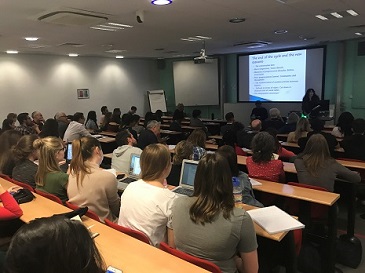 Following Professor Svampa's talk Dr Jeffrey Webber, Senior Lecturer in the School of Politics and International Relations, provided a response and opened up discussion around the presentation. This followed a highly engaged session with postgraduate students and staff from QMUL and KCL the day before. The event, which was followed by a wine reception, was kindly sponsored by the Institute for the Humanities and Social Sciences. 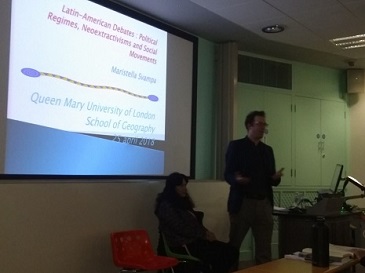 Professor Svampa’s talk formed part of a trip to the UK that included visits to the University of Cambridge and the University of Warwick. Her visit was organised by Dr Sam Halvorsen, Lecturer in Human Geography, who is currently involved in various initiatives that attempt to close the gap between Anglophone and Latin American scholarship. These include a new QMUL Latin American Discussion Group, co-hosted by the Schools of Geography, Politics and International Relations and the Centre for Primary Care and Public Health, as well as a new Latin American Geographies in the UK Research Network.

Alongside interest from a multi-disciplinary set of academics, Professor Svampa’s visit was also of interest to undergraduate students at the School of Geography, many of whom turned up to hear her talk in relation to the first-year module Global Worlds in which Dr Halvorsen has encouraged them to take seriously the experiences and knowledges produced in regions of the global south, taking Latin America and its recent and ongoing socio-political transformations as a point of focus.

Dr Halvorsen hopes to maintain a steady presence of Latin American intellectuals visiting QMUL and is delighted to announce that renowned Brazilian Geographer Bernardo Mançano Fernandes will be visiting the School of Geography in June to participate in a LISS DTC sponsored event on “Doing participatory geographies: a workshop on practicing engaged research”. To sign up to the event, please click here.