How do salt marshes cope with storm surges?

Salt marshes occur on shallow coasts influenced by tides. They provide a habitat for adapted plants and animals, protect the coast, and contribute to climate protection as they store carbon dioxide from the atmosphere. However, if storm surges occur more frequently due to climate change, the system might become imbalanced and lose its protective function for the coast. 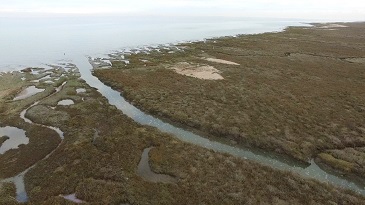 A team of internationally respected coastal scientists including Professor Kate Spencer, Environmental Geochemist at Queen Mary’s School of Geography and Dr Simon Carr, Programme Lead for Geography at the University of Cumbria, formerly of Queen Mary, are conducting a unique experiment into how salt marshes cope with storm surges, as part of RESIST(UK) – a collaborative research project between the University of Cambridge, the British Geological Survey and Queen Mary University of London.

RESIST(UK) stands for ‘Response of Ecologically-mediated Shallow Intertidal Shores and their Transitions to extreme hydrodynamic forcing in UK settings. It is a Natural Environment Research Council (NERC) funded project that is running in the UK, parallel and complementary to an EU-Hydralab+ funded ‘RESIST’ project.

The project is led by Dr Iris Möller from the Cambridge Coastal Research Unit (CCRU) at the University of Cambridge, and the experiment is carried out at the Large Wave Flume (Großer Wellenkanal) at the Coastal Research Centre in Hannover, Germany. 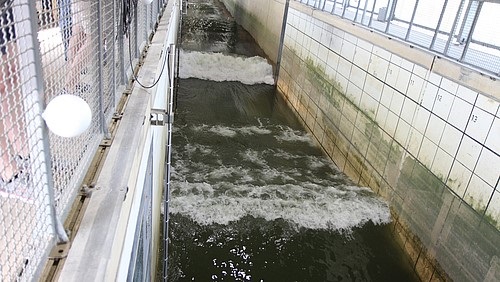 Coastal wetlands cover 756,000 km2 globally. While coastal populations are increasingly at risk from flooding and erosion, this is particularly the case on coasts fronted by wetlands (nation states with mangroves may face a coastal population rise from 1.8 billion to 2.8 billion between 2000 and 2025 (Dodd and Ong, 2008)).

To date, researchers can neither predict the resistance of tidal marshes against more frequent or more severe flooding nor what kind of storm surges might destroy them. Salt marshes are considerably more complex than dunes or sand beaches. On the one hand, they contain large quantities of silt and loam, resulting in "sticky" soil. On the other hand, their protective vegetation is more or less pronounced.

“We just don’t know how important plants are in binding the soil together and stabilising the marsh. Our project will answer this question and supply the first ever data on the resistance of these fascinating natural structures to the kinds of storms from which we need protection as sea levels rise and stormier seas occur in a changing climate,” says Dr Möller.

Professor Spencer and Dr Carr are leading work that explores the geochemical and structural controls on salt marsh erosion and explains salt marsh response to increased wave energy and storm conditions. This uses a combination of standard geochemical techniques and microcomputed tomography, as well as using the EU-Hydralab+ facility in Hannover experimenting on large saltmarsh mesocosms. Dr Clementine Chirol, a coastal geomorphologist and geodata analyst who recently joined the School of Geography, is working alongside Professor Spencer as Postdoctoral Research Assistant.

The project aims to understand how soil type and biology affect the resistance of exposed salt marsh areas to the eroding forces of waves and tides; as well as to develop methods for mapping such resistance and its variability across space to allow prediction of marsh loss in different areas of the marsh, for any given set of sea level, wave and tide conditions. 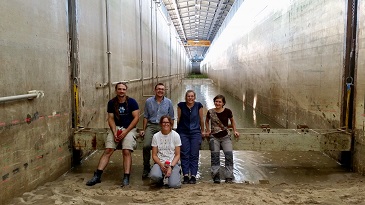 Catching and assessing a storm impact in the natural world is a tough thing to do; but the impacts of storm waves on transplanted saltmarsh soil and vegetation can be simulated under controlled laboratory conditions. Running big storm waves over a trial saltmarsh needs a big artificial channel, or flume.

We will expose sediment core samples extracted from the silty east coast and the sandy west coast of the UK in July to large waves and storm surges in one of the largest indoor flumes in the world, the 300m long, 5m wide, and 7m deep Large Wave Flume – a joint facility of Leibniz University Hannover and Technical University Braunschweig. The hydraulic wave generator simulates continuous waves and swells under deep and shallow water conditions. In addition, it generates continuous waves up to two metres high, as well as wave spectrums with significant wave heights of up to 1.3 metres. 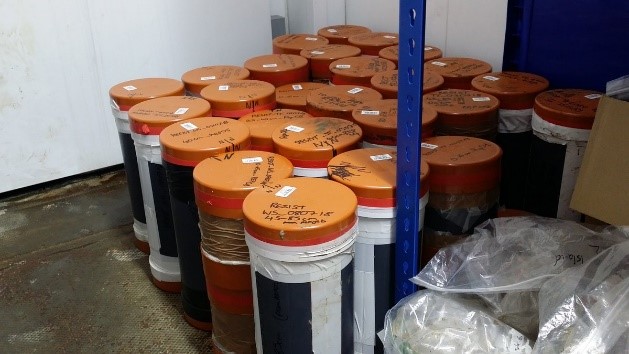 Researchers will examine sediment structure using a micro CT scanner at Queen Mary – this is one of the first times that this technique has been used to examine saltmarsh sediment and root networks. The cores will be opened at the side and fixed at the end of the Large Wave Flume. This is where they will be exposed to the waves, enabling researchers to track the progress of erosion after each wave cycle.

The societal value of coastal salt marsh is high, but areas are in global decline. Salt marsh surfaces appear remarkably resistant to storm impact and are currently keeping pace with sea level rise in elevation terms. However, marsh margin erosion by tidal currents and waves is resulting in considerable net marsh loss.

The RESIST research project takes on the challenge of finding out whether naturally protective salt marshes can resist severe storms. The research could show the consequences of climate change, which could include more frequent storm surges, for salt marshes.

Professor Kate Spencer is leading on a new undergraduate field class module, Future Coasts, which will be running for the first time in the School of Geography in the 2018-19 academic year. The module aims to introduce students to the impacts of climate change on coastal environments and understand how coastal morphology responds to external forcing from sea level rise, wave and tidal energy and the impacts of erosion and flooding on coastal habitats and communities. The field trip will be based around Rotterdam, the Rhine-Meuse delta and Dutch coast and will also explore how innovative and sustainable approaches can be used to build resilient cities, reduce flood risk, improve habitats and to mitigate the impacts of climate change.