What better way to begin your degree course than by exploring the city that you will be living, working and studying in for the next three years?

Over 200 geography and environmental science students from Queen Mary's School of Geography took part in a week of field activities across London in the very first week of their studies at the end of September, as part of the School’s ‘Green London’ induction fieldwork class. Now in its fifth year, Green London introduces new students to the green spaces and environmental processes that shape the capital. The fieldwork week also provides lots of opportunities for students to get to know each other and staff from the School.

The Regent's Canal in east London. © Will Robertshaw

“The motivation behind the class is to use immersion in London to break down some assumptions about cities as vast expanses of glass, tarmac and concrete,” said course convenor Dr Stephen Taylor. Over the course of five days, students explored the hidden green spaces and pocket parks of the City of London, investigated how natural spaces and biodiversity have been ‘made’ as part of the redevelopment of Stratford’s Queen Elizabeth Olympic Park, and examined the lives of the human and non-human inhabitants of the Regent’s Canal. “Cities are full of green spaces that provide benefits for all,” said Dr Taylor, “but it is important that geographers and environmental scientists are aware at an early stage in their studies of their fragility in the face of deepening urbanisation and rising pollution.”

In examining these themes, the School of Geography partnered with the Roman Road Trust – a citizen-led regeneration group operating in nearby Bow and Bethnal Green – to conduct an audit of single-use plastic consumption along the Roman Road high street. Prior to commencing this research, Green London students heard from Ellie Mackay of The Plastic Tide about rising levels of plastic on Britain’s beaches, and were later introduced by Professor Kate Spencer to cutting edge research conducted in the School on the toxic environmental legacies of historic landfills. Teams of students then spent two days carrying out plastic-use surveys at businesses along Roman Road and conducted short interviews with local residents to gauge their opinions on going ‘plastic free’. Preliminary findings from this research were then presented back to the Trust at a concluding session, and students heard from local business-owners and entrepreneurs about their own attempts to develop environmentally sustainable businesses and supply chains. The results from the survey will be used to inform local regeneration plans and efforts to encourage more businesses to go ‘plastic free’. 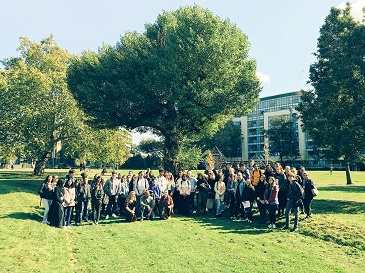 Reflecting on the successful week, Head of School, Professor Alastair Owens, said: “Our students were fantastically engaged throughout the week and asked astute and searching questions of speakers, and worked with enthusiasm and determination when conducting fieldwork.”

While students returned to lectures and classes in the second week of the semester, the legacy of Green London continues. Professor Owens has organised first year student volunteers to conduct a campus survey to support the London Borough of Tower Hamlets’ application to the Greater London Authority’s Good Growth Fund to open up an access route from the northeast of Queen Mary's Mile End campus to Roman Road via the historic Meath Gardens.

‘Guerrilla Geographer’ and National Park City campaigner Daniel Raven-Ellison will also visit the School later in the semester to update first-year students on his efforts to have London accredited as a National Park City, a campaign supported by Queen Mary students in the first Green London week in 2014.