After ten weeks of seminars and lectures at Queen Mary, students travelled to Boston, Massachusetts as part of the module Boston Reworked: The Making of a North American City, to examine how the city was built and transformed over three dramatic centuries of political and industrial revolutions, mass immigration, economic decline and reinvention. Looking at archive materials, historic maps, films and academic literature laid a solid foundation of understanding, but the immersive experience of being in Boston brought it all to life. 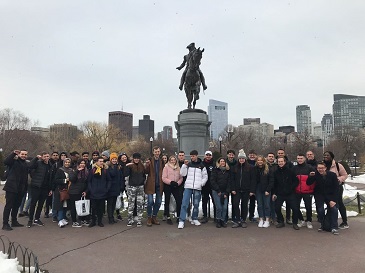 “Boston has been at the forefront of political, economic and social change from being one of the most prominent cities in the American Revolution to its recent reinvention as a hub of biotechnology,” said one of the students, Katie-Scarlett English (Human Geography BA 2019). “Having never visited the East Coast of North America, this was an entirely new experience for myself and what an experience it was!”

“The School took a visit to Harvard University in Cambridge, Boston which along with the Massachusetts Institute of Technology (MIT) dominates the economic, social and cultural life of Cambridge. This was a great start to the trip and allowed us to explore the campus.

“We also had the chance to explore Boston via the famous walking tour: ‘The Freedom Trail’ visiting historical points of interest from Boston Common to Faneuil Hall.

“I enjoyed the independence we were granted to also explore the city for ourselves as we dove into our chosen neighbourhoods, our group explored the North End, Boston’s ‘Little Italy’ and it certainly lives up to its name!

“I feel that I have learnt a lot about Boston’s rich history and would highly recommend this trip to anyone who is eager to understand what made Boston one of the most influential city’s in North America.. and if they’d like to do a spot of shopping too!” 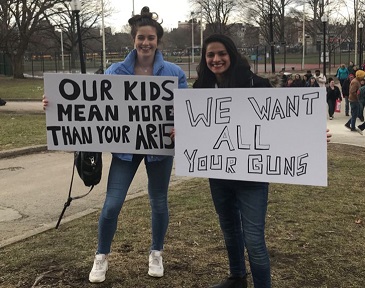 Alastair Owens, Professor of Historical Geography and Head of School who led the field class, said: “Throughout our module we have been thinking about Boston’s long history as a migrant city, its connections to the rest of the world, and the struggles different populations have faced in countering prejudice and inequality and seeking recognition.”

“While we were staying in the city we got to witness – and in some cases participate in – the huge #MarchForOurLives protests about American gun laws and, particularly, the impacts of gun-related violence on African American populations. We a spent fascinating week studying the city, but on this trip it really felt like we were also participating in the making of a new chapter of its history,” he added.

The Boston field class module runs in alternate years and is optional for second- and third-year undergraduate students on the Geography BA, Human Geography BA and Geography with Business Management BSc courses.

Absolutely fascinating visit to Boston Archaeology Laboratory to hear about @JadeLuiz ‘s important research on C19th Boston brothel as part of @QMULBoston - great questions from team about how to intrepret a material culture of hygiene, self medication & domestic respectability pic.twitter.com/Q1VziOYdel

America protests against gun violence. Today we have been witnessing and taking part in mass rally on the Boston Common #MarchForOurLivesBoston pic.twitter.com/U3lC7C1HjM