“We are a single cell in a giant vibrant diverse machine”: Indoor Street Party at the Geffrye

These were some of the questions that were raised during the indoor street party, ‘Home and the City: Celebrating the life on the Kingsland Road’ at the Geffrye Museum on Saturday 25 February. The street party invited residents for an afternoon of tea, cake, and workshops arranged by artists and organisations. 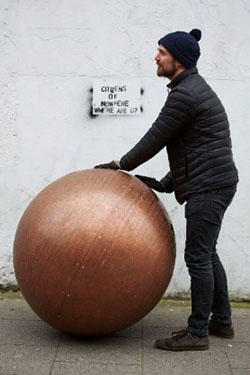 The Globe is rolled along Kingsland Road.

The event was organised by researchers from QMUL’s Centre for Studies of Home – including Professor Alison Blunt, Head of School of Geography and Casper Laing Ebbensgaard, Postdoctoral Research Assistant – and was in collaboration with the Geffrye Museum of the Home and part of the wider Home, City, Street research project, funded by QMUL’s Centre for Public Engagement (CPE). The CPE have awarded funding to nine projects in their annual large funding round this year, offering grants of up to £20,000 to enable staff and students to engage public with university research and learning through public engagement. This event is the first of a range of public engagement projects that will run until July this year, as part of the ‘Home, City, Street’ project.

Ranging from families that just recently moved to the area to veteran residents whose families have lived in these parts of Hackney through generations, the street party gathered residents from a broad range of ages, ethnicities, and locations, locally and beyond. The focus of the afternoon was to explore what it means to feel at home in the city, and through different workshops and displays, the visitors were invited to engage in conversation about the home and the city, belonging, food, and hospitality.

As one guest explained, the street party made her realise that living in the city makes us all “a single cell in a giant vibrant diverse machine”. The sense of being part of a larger whole was a core theme explored by the Leverhulme Artist in residence at QMUL, Janetka Platun, through her project ‘Globe’. At 2pm the 1m in diameter copper sphere was rolled on a small trip along the Kingsland Road and around the Geffrye, inviting residents to give Globe a roll themselves. The film, ‘Here be Dragons’, which documents the Globe’s journey through the streets of east London in the summer of 2016 was launched, and later in the afternoon Janetka hosted a globe making workshop for visitors to create their very own globes, and explore what it means to feel at home in a globalized world. 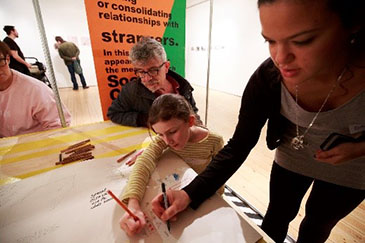 A family draw a sketch of hosting visitors in their home.

During another workshop, Torange Khonsari, founder of Public Works invited people to take a seat in their public living room installation, for a chat about hospitality and welcoming visitors in their home. People’s stories were written down or drawn on a long scroll of paper, slowly creating a wall paper filled with stories and memories. Several visitors recognised the importance of being hosted at their family and friends, to how they feel at home in their neighbourhood. As one visitor reflected, the event “reminded me how lucky I am to live in such a great area, near my family”.

Simultaneously, visitors could take part in building a long map of Kingsland Road with dried beans and found objects. Led by artist, Sue Mayo, visitors chose an object amongst a wide range of colourful, found objects, and placed it on the map, slowly building a mouldable map of Kingsland Road’s present and past places of significance to visitors. As one participant reflected upon, at the event, the different workshops “made me think more about my childhood, and how London has changed since the 1970s”. The sense of experiencing the changes that the area around Kingsland Road has undergone, was further explored in the ‘Food Museum’, installed by East Side Community Heritage. With a display of vintage food packaging and images of the local grocery shops, restaurants, cafés and takeaway shops on Kingsland Road, the ‘Food Museum’ invited residents to share memories of their favourite foods, and where they eat them. 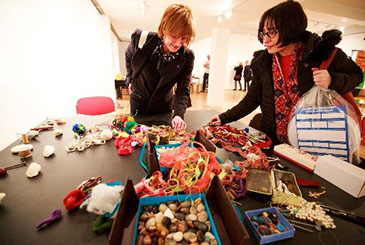 Visitors select an object to put on the map of Kingsland Road.

Finally, in the Story Telling workshop, led by the Ministry of Stories, children were invited to write and publish their very own books, thinking creatively about writing personal stories. The workshop was buzzing with people of all ages and the intergenerational interaction carried on throughout the event. At a long table tea and cake in all shapes, colours and tastes were served, proving a relaxing space to have informal conversation with friends or other visitors. One guest reflected upon the event, stating that he “realized how many people and things I know and take for granted—and how good that is”. A number of visitors reported how they met neighbours or people they knew through local organisations, without having organised the visit together, thus showing how the event brought residents together, locally and across different places.

Over four Saturdays in March and April, Sue Mayo is hosting Settlement Workshops that will explore in more depth what home feels like to residents, what an ideal imaginary home looks like, and residents will be invited to build such homes with found objects. Concurrently, residents are invited to take part in creating a catalogue of ‘Home-City Biographies’ that will give testimony to the diversity of past and current lives lived on and nearby the Kingsland Road. Through interviews, film and photography residents will contribute to documenting the history of Kingsland Road, as experienced, narrated and explained by its residents. The Home-City Biographies will be deposited and exhibited at the Geffrye Museum.