The potential ecological impacts of new lighting concepts on ecosystems should be considered by landscape and urban planners, lighting engineers and ecologists – research suggests. 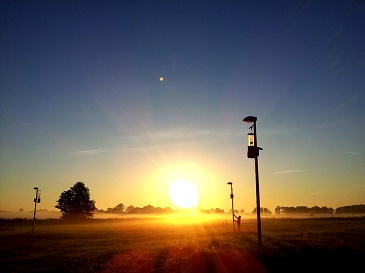 Setting the trap for the dirunal sampling

Streetlights near waterways attract flying insects from the water and change the predator community living in the grass beneath the lights. The findings, published last month in Frontiers in Environmental Science, show that night-time artificial lighting could disrupt the surrounding ecosystem and biodiversity.

Artificial night-time lighting is increasing worldwide at a rate of approximately 3-6 per cent a year. One drawback of street lighting is its effect on flying insects, many of which have an insatiable attraction to these lights.

"Artificial lighting at night-time is a major component of global environmental change and a threat to biodiversity," explains Alessandro Manfrin, a researcher at the Leibniz-Institute of Freshwater Ecology and Inland Fisheries (IGB) and now the Environmental Campus Birkenfeld, University of Applied Sciences Trier, and former PhD student at QMUL. "This is particularly true near rivers and lakes, where human populations are concentrated."

Aquatic ecosystems such as rivers and lakes are heavily interconnected with the ecosystems of their banks and shores. Introducing artificial lighting along riverbanks or lakeshores could have disruptive effects on these fragile ecosystems.

However, examining the effect of waterside lighting on the surrounding ecosystem is not an easy task. Urban environments affect biodiversity in a variety of ways, such as through pollution and habitat loss, making it difficult to know which factors are causing which effects.

To investigate this phenomenon far away from the influence of an urban environment, Manfrin and his colleagues set up a series of streetlamps beside two different drainage ditches in a nature reserve in Germany. This remote area is one of the least illuminated areas in the country, meaning that the wildlife there had never been exposed to artificial light or other disruptive factors associated with urban environments. 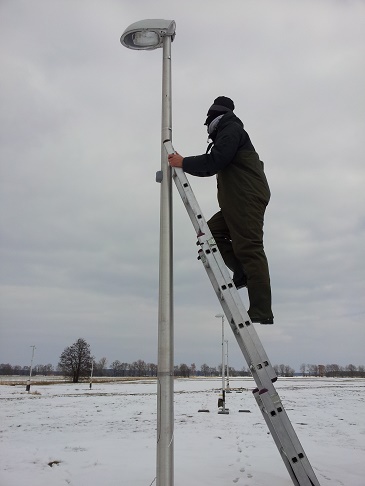 Dr Manfrin during fieldwork, removing the traps in the experimental field in Brandenburg

The researchers turned the streetlamps on at one of the ditches every night, but left the lamps permanently off at the other ditch. They used traps to investigate the types of insects and other invertebrates present at each site.

Some of the traps caught insects as they emerged from the water in the ditches. The researchers found that there were many more insects leaving the water from the illuminated ditch. The lights may have made it easier for larger fish to hunt and eat smaller fish that normally prey on insects, allowing more insects to survive and thrive.

As expected, the team also found far more flying insects near the illuminated lamps themselves, compared with the lamps that were never on. This seems to have had a knock-on effect on predators living in the grass below the lamps. "The abundance of several nocturnal spiders increased at the illuminated bank, and their activity was extended into the day, while the abundance of nocturnal ground beetles decreased," says Manfrin.

The study shows just how disruptive artificial lighting can be for wildlife. "We showed that artificial light affects insect behaviour, and that this has the potential to change ecosystem dynamics," says Manfrin. "It is important to account for potential ecological impacts when designing new lighting concepts, and these and other similar results should be considered by landscape and urban planners, lighting engineers, and terrestrial and aquatic ecologists." 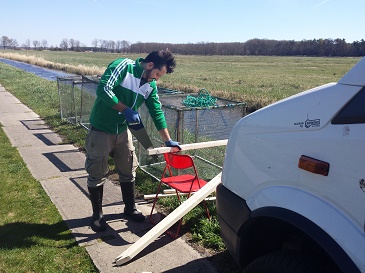 Preparing a cage for fish to use in an experiment

Manfrin completed both his Bachelor and Masters degrees in Biology at the Roma Tre University in Italy, before moving to Berlin to work at the Leibniz-Institute. This is where he was first introduced to the topic of light pollution and became increasingly aware of the threats that light pollution may pose on ecosystems.

In 2013, he was awarded a three-year doctoral fellowship as part of the Erasmus Mundus Joint Doctorate SMART (Science for MAnagement of Rivers and their Tidal Systems) Programme – an interdisciplinary programme integrating the physical, chemical and biological sciences with three main institutions (University of Trento; Free University Berlin; and Queen Mary University of London) and Associate Partners including research institutions, Government Agencies, and Private Companies.

"The programme was fundamental for my scientific carrier economically and scientifically. Thanks to the SMART programme, I was able to conduct my PhD in a number of universities and research institutes across Europe," says Manfrin.

"My time in the School of Geography at QMUL was very memorable. The professionalism and the availability and openness of the colleagues, professors and administrative staff immediately impressed me. I found Professor Geraldene Wharton a very prepared supervisor who was able to guide me and support me scientifically in every step of the way during my stay at the institution," he added.