Success for Geography at Sustainability Awards

The annual Sustainability Awards recognise both internal and external sustainability contributions to QMUL. The School of Geography has scooped up four awards at this year's awards ceremony on 29 June.

Over the year, the School has raised over £600 for charities including Breast Cancer Now, the Whitechapel Mission, the Fairtrade Foundation and Toilet Twinning. We have written guest blogs about our new geography soup kitchen, as well as toilet twinning. 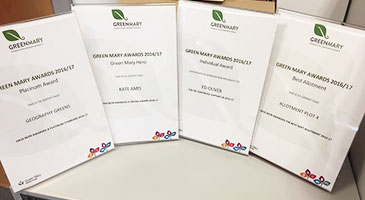 The School was awarded four prizes this year.

Many thanks to everyone who has helped the Geography Green Mary team this year by attending events, baking cakes or donating money and special thanks to Kate for her ideas and enthusiasm, and Ed for all his work on keeping us green!