New research has found that there are at least 2000 food banks in the UK, a higher number than previously thought. The research is published by the Independent Food Aid Network (Ifan), Chaired by Jon May, Professor at the School of Geography, Queen Mary University of London (QMUL). 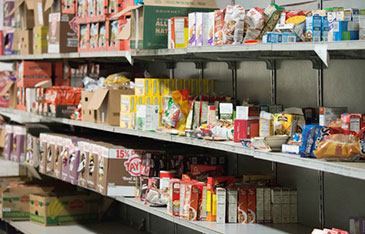 According to the report, a growing number of food banks are giving out emergency food parcels on a weekly basis to people in hardship.

The report counts the 1,373 distribution centres that operate outside of Britain’s biggest food bank network the Trussell Trust. This research complements current information by the Trussell Trust which recently reported that it gave out a record 1.2m food parcels to families and individuals in need in 2016-17, the ninth successive year in which demand had risen.

Commenting on the findings of the report, Professor Jon May said: “There are now food banks in almost every community, from the East End of London to the Cotswolds. The spread of food banks maps growing problems of poverty across the UK, but also the growing drive among many thousands of people across the country to try and do something about those problems”.

Ifan’s researcher, Sabine Goodwin, who spoke to more than 50 food bank workers during the project, said most had reported rising demand for food aid: “Many feel they are firefighting, finding a way to deal with the logistics of feeding more and more people, with no time to advocate for changes that would eradicate the need for food banks in the first place.”

Labour MP Frank Field, a veteran poverty campaigner and chair of the Feeding Britain charity commented: “These figures show the tide of hunger sweeping the UK. It’s another piece in the jigsaw puzzle of destitution in this country.”