A film directed by Eithne Nightingale from Queen Mary University of London (QMUL) has made the shortlist for the Arts and Humanities Research Council’s prestigious 2017 Research in Film Awards. 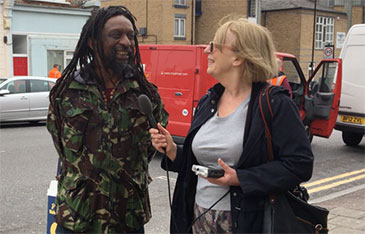 The film, called Ugwumpiti, has been shortlisted for the Best Research Film of the Year. Ugwumpiti tells the story of Maurice Nwokeji and his journey from war-torn Nigeria to London. Ugwumpiti is part of the award-winning Child Migrant Stories project from QMUL’s School of Geography.

Hundreds of films were submitted for the Awards this year and the overall winner for each category will receive £2,000 towards their filmmaking. The winner will be announced at a special ceremony at 195 Piccadilly in London, home of BAFTA, on the 9 November.

Launched in 2015, the Research in Film Awards celebrate short films, up to 30 minutes long, that have been made about the arts and humanities and their influence on our lives.

There are five categories in total with four of them aimed at the research community and one open to the public.

Eithne Nightingale said: "I am thrilled that Ugwumpiti has been shortlisted. Maurice Nwokeji’s story of surviving bombs and famine as a child during the Biafran war, before joining his parents in Hackney, is full of pathos and humour. It is enriched, too, by Maurice’s own music - performed by his band One Jah, inspired by his harrowing childhood experiences. It seems particularly apt that the film is gaining recognition in the 50th year since the beginning of the civil war in Nigeria."

A team of judges watched the longlisted films in each of the categories to select the shortlist and ultimately the winner. Key criteria included looking at how the filmmakers came up with creative ways of telling stories – either factual or fictional – on camera that capture the importance of arts and humanities research to all of our lives.

Judges for the 2017 Research in Film Awards include Richard Davidson-Houston, Head of All 4, Channel 4 Television, Lindsay Mackie Co-founder of Film Club and Matthew Reisz from Times Higher Education

The winning films will be shared on the Arts and Humanities Research Council website and YouTube channel. On 9 November you’ll be able to follow the fortunes of the shortlisted films on Twitter via the hashtag #RIFA2017.