Carolina Pinto is a former student of the Integrated Management of Freshwater Environments MSc degree programme. She graduated in 2013 and now works for an environmental consultancy, Aplysia Environmental Solutions in Brazil. 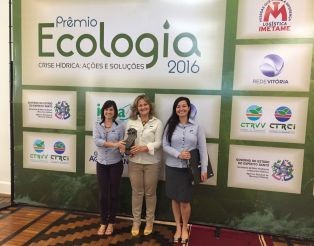 For her MSc dissertation, Carolina worked in collaboration with the Environment Agency on the effectiveness of wood in river restoration. She has maintained close links with both QMUL Geography and the Environment Agency after returning to Brazil to work for Aplysia and also initiated a UK-Brazil Learning Partnership involving a week-long series of events focusing on “working with nature for people in river catchments” in April 2015. The event culminated in a workshop on Cost Effective River Restoration that was hosted by QMUL Geography.

After joining Aplysia, Carolina used the knowledge and skills gained during her MSc at QMUL to lead the development of an innovative restoration project, “ReNaturalize” that uses large wood to restore natural processes in the River Mangaraí, in Brazil. The project began in 2014 in the Atlantic tropical forest in the state of Espírito Santo, and led to the discovery of a new genus and species of fish in the River Mangaraí. ReNaturalize aimed to re-establish hydrological systems that support healthy and biodiverse aquatic environments. It was also sought to integrate local communities, thus, it was possible to align the demands of these communities with the project objectives. The project was awarded the Ecology Prize in December 2016, presented to Carolina and her colleagues at Aplysia at Anchieta Palace, the headquarters of the Government of Espírito Santo in Brazil.

"It was a great achievement to win this award, as recognition for the initiative and also as a mean to disseminate the good practice of river restoration that is used in the UK, spreading the idea of the importance of using innovative practices to solve problems related to water issues and the conservation of our river basins,” said researcher and project developer, Carolina.