Environmental Science BSc students Will Flynn and Jason Lynch spent a week with the School of Biological and Chemical Sciences (SBCS) and the Royal Tyrell Museum of Palaeontology (RTMP) at Dinosaur Provincial Park in Alberta, Canada this August. Over the course of the week they observed fossils from the Late Cretaceous Period to understand species and their relationships, as part of a third-year module covering the wider topic of taxonomy; an area critical to the understanding of the world’s biodiversity and its conservation. Read a summary below from Will. 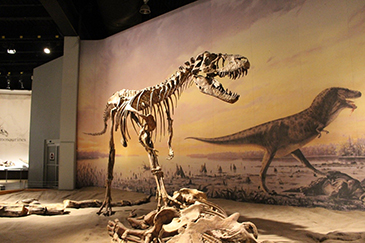 An impressive Gorgosaurus on display at the Royal Tyrell Museum of Palaeontology in Alberta, Canada.

“After arriving at Calgary airport, a short 2-hour coach journey took us to the camp in a beautiful setting in the Canadian Badlands. We spent our first working day at the RTMP, looking at specimens that we were likely to encounter in the field. This was a great chance to brush up on anatomical drawing skills and get an idea of the context of the trip.

“With the knowledge gained from our trip to the museum, it was time to head out into the field. A briefing from the Park Officer, Fred Hammer, alerted us to the dangers of working out in the Canadian Badlands and codes of practice when working around fossils. After a century of fossil collecting, there are now tight laws in place to protect the remaining supply of fossils. 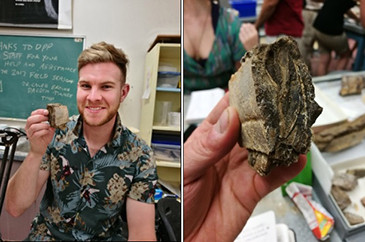 “In the field, we were joined by researchers Darren Tanke and Caleb Brown from the RTMP. Permits held by Darren and Caleb allowed any interesting finds by students to be collected and incorporated into the museum's collection. A small section of Hadrosaur  jawbone was discovered by Jason, beautifully displaying a set of teeth from the duck-billed dinosaur still in place. This proved to be a valuable find for the museum that already holds thousands of specimens from the Cretaceous period. 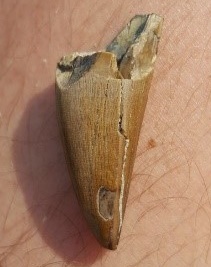 “Among the many Hadrosaur  limb bones and vertebrae found, were numerous Tyrannosaur  teeth. Many dinosaurs, unlike mammals, continually shed and regrow teeth throughout their lives. This means that it is common to find the teeth of the largest carnivores ever to have lived. One of the rarest finds of the trip was from SBCS lecturer Dr Dave Hone, of a small section of jawbone from an early mammal species. It was later to be identified as belonging to the genus Meniscoessus, a small rodent-like mammal from the Cretaceous period that is key to understanding the evolution of mammals.

“Back at camp in the evenings, individual presentations took place, based on a predetermined taxonomic academic paper, followed by a group discussion on the topic. This gave us a good opportunity to have an in-depth look at a specific area, and debate contentious issues in the field of taxonomy. It also formed the basis for lecture topics that will be covered in greater detail on return to university in our third year.

“The final day of the trip saw a second visit to the museum. This gave us the chance to see many of our finds in context. A small section of Ceratopsian Beak (horned dinosaur, including the infamous Triceratops) found on the third day could be seen in full context of the animal. Orientation was determined, and further understanding of function was developed. An ankle bone from a species of Hadrosaur  (many of us thought was a wind-up by demonstrator Darren due to its flat rock-like shape) was seen on the foot of a well-preserved specimen of the species, thus proving that it was indeed a preserved foot bone! 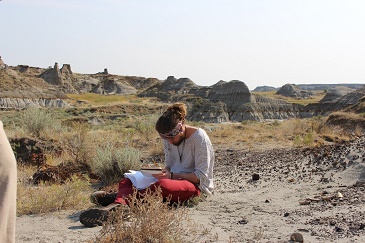 “The trip was a perfect opportunity to learn about the Cretaceous dinosaurs of Alberta, from one of the richest sites for dinosaur bones in the world. It was a great introduction to a module on taxonomy, a subject crucial to the future conservation of species on the planet, at a time when we are losing global biodiversity at an alarming rate.”

Environmental science students can opt to take the field trip to Canada, as part of 'Species and their Relationships: Dinosaurs to DNA' - a third-year module offered by QMUL's School of Biological and Chemical Sciences.