The Olympic Legacy: how has east London changed? 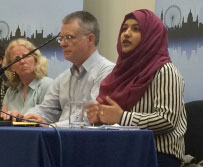 As part of QMUL's first Festival of Communities, the Mile End Institute brought together key players in London's Olympic project to reflect on how east London has been changed by the experience of hosting the games.

Has the promised transformation taken place? What do east London's communities feel has been the legacy of the Games? These were some of the key questions asked during the debate which was chaired by QMUL Geography’s Professor Jane Wills.

“Tonight is about taking stock of London 2012 – four years on and just before the opening of the 2016 Olympics in Brazil.” – Professor Wills opened the evening. She added “students from the School of Geography worked with Citizens UK in the years while the facilities were being built and when the event was being planned to try and ensure that local interests were represented in the process. We had students go into secondary schools to explore pupils’ engagement in sport and their ideas for using the facilities after the games. We had students interview local residents to support the bid for a community land trust at St Clements Hospital, down the road from here. We were also able to make sure our students applied for living wage jobs on the park during the Games.”

Speakers included Paul Brickell from the London Legacy Development Corporation who said “the things that may appear new as a result of the changes, may not really be new at all. It’s about east London getting back its confidence”.

School of Geography graduate and community organiser Yasmin Aktar said that “pre-Olympics, Citizens UK (a broad based community alliance that developed a ‘people’s plan for the Olympics’ in the year before the bid was submitted in 2004) asked the local people what they wanted from the Olympics and what the Olympics meant for them. They wanted jobs for local people, young people to be paid the living wage, training for young people and affordable housing. Jobs were delivered at the living wage She added that “the Olympics have left history in east London but there’s work still to be done, especially around housing”.

Professor Allan Brimicombe from the University of East London talked about what legacy actually is and what the net impact from a mega event like this might be. Geraldine Blake, CEO of Community Links – a charity that helps disadvantaged local people – emphasised that one significant change is “being on a panel with speakers who are so positive about east London”. She added that “there are still young people in east London who feel that the ‘new Stratford’ doesn’t belong to them”.

The general feeling was that there has been an inevitable gentrification to the area and it is still hard to see return on investment.