Spending a year abroad during university is an enriching and exciting way for any student to broaden their horizons and perspective – and exploring the world is second nature to our geographers and environmental scientists.

Here at Queen Mary University of London we offer several opportunities for students who are interested in taking some time abroad – from summer schools to semester or year-long exchanges. We like our students to develop a global perspective and each year they travel as far afield as America, Asia, Australasia and Europe. 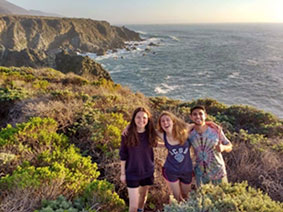 Eleanor Dixon-Brandt (Geography BA, 2017) spent her second year at the University of California, Santa Barbara on the international exchange programme. Ellie said: “I particularly liked UCSB because its geography department looked amazing and it offered exactly what I was interested in. Studying there was completely different but in a good way. It was much more difficult with mid-term and final exams, but every single essay was so interesting and sometimes I got to write the essay question which I loved. Everyone I met was super friendly, kind and open. I joined the excursion club, a surf team, the water polo team, and even an intra-mural soccer team, and I was able to visit places such as Las Vegas, Death Valley, Monterey, San Diego, San Francisco, Yosemite and Big Sur.”

Jiaying (Cherry) Huang (Geography BSc, 2017) choose Melbourne as her study abroad destination. She told us that besides having a very different study experience, she picked up some other skills too. “Through tutorials, I got to learn about how Australians think of world issues, and learnt about subjects that I never thought about before, such as the aboriginal people in Australia. I was really excited to try new things at a new place, so I took a Muai Thai class. I also studied Japanese as one of my subjects which was really fun. Oh and because Melbourne is such a good place for coffee, I joined a barista class and got a recognised certificate!” – Cherry said. 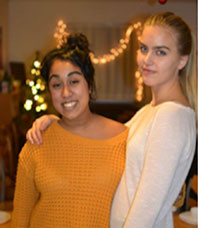 Lauren (left) with one of her flatmates.

QMUL also runs Erasmus+ and various partner summer schools programmes. Lauren D’Costa (Geography BSc, 2017) spent the first term of her second year at Roskilde University in Denmark on the Erasmus+ exchange programme. “I definitely think it has enriched my academic life and will help me with applications in my future career,” she said. “The best thing was living with 12 other Erasmus students. I managed to travel to Sweden and made numerous trips around Denmark. I’d highly recommend the study abroad experience to anyone as I think it will challenge you and make you a stronger person as a result!” 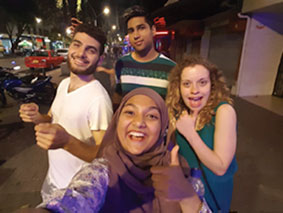 As part of QMUL’s summer school programme, Tanzina Khatun (Geography BA, 2017) spent three weeks in Colombia at the Universidad de Antioquia. She says the classes were fun and it was enjoyable being taught in Spanish and English and having the choice to talk to the lecturers in either language. “I’ve been trying to practice Spanish since returning to England and will continue to do so. I hope this assists my career prospects when I endeavour to work with different communities, particularly those where Spanish is widely spoken,” Tanzina added. This year’s cohort was the first group to embark on this programme in Medellin, Colombia.