Dave Horne is Professor of Micropalaeontology in the School of Geography at QMUL. Dave has worked at Queen Mary for 13 years, and specialises in the study of living and fossil ostracod crustaceans, both marine and freshwater, and their applications in palaeoclimatology, palaeoceanography, biogeography, crustacean phylogeny and the evolution of sex and parthenogenesis. In this interview, he talks about his research, his new administrative role in the School, his advice for future geographers and environmental scientists, and what he does in his spare time.

You've been at QMUL for just over 13 years now. What have you enjoyed about working at the university?

I have found the School of Geography, and more generally QMUL, to be a very friendly and supportive academic environment, in which I have enjoyed excellent opportunities to develop my interests in teaching and research. I’ve formed a really good working relationship with the Thinking Writing team (part of Learning Development at QMUL) that has enhanced my teaching in so many ways. I’ve been encouraged and enabled to pursue my own research projects, plus one or two I’d never have imagined getting involved in before QMUL such as collaborating with the School of History to map the distribution of nuns in the 18th and 19th centuries. I’ve been able to make the most of opportunities that have come up, including invitations to deliver seminars and short courses in Berlin, Athens, Tartu and Rio de Janeiro; in 2015 I was based in Paris for two months of collaborative research at the Université Pierre et Marie Curie, during which I commuted to London six times to hold revision sessions, mark exams and attend meetings!

Can you tell us about your research? Is there anything in particular you're working on at the moment?

My main research focus is using ostracod microfossils to reconstruct the changing environments and climates of the past one million years, often in connection with archaeological investigations of early human presence in Britain thanks to collaboration with my School of Geography colleague Simon Lewis. I use a method that I developed while at QMUL, which involves using a European distributional database and a GIS to determine the present-day winter and summer temperature ranges of ostracods that live in lakes and rivers, and then applying this knowledge to working out the equivalent temperature ranges within which the species in a fossil assemblage could have co-existed during a particular interval in the past.  For example it showed us that 300,000-year old deposits in a former channel of the River Thames were formed in a more continental climate with greater seasonal extremes than at present, similar to that of northern Germany today. To improve the accuracy of the method I am collaborating with scientists in several countries to increase the size of the database that we use for calibrations; one aspect of this work is the harmonisation of North American and European datasets, in pursuit of which I’ve visited Ottawa three times to study an ostracod collection at the Canadian Museum of Nature.

You recently discovered a rare species of ostracod. How did this come about and what does this mean for science? 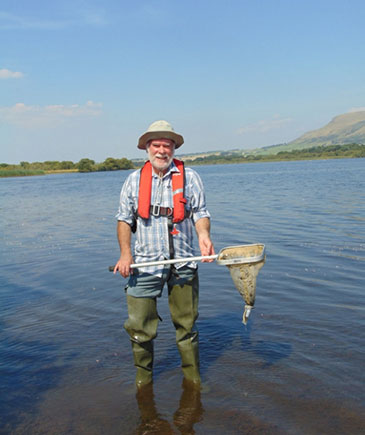 It was a particular species that is common as a fossil in ancient lake sediments and is widespread today in lakes in the northern hemisphere, so it has considerable value as an indicator of past climates similar to or colder than that of today in Britain.  Although it has often been collected alive in Canada and northern Europe, we only knew of two places in Britain where it still lives today, one in NW Scotland and one in northern England. On a visit to the Discovery Museum in Newcastle upon Tyne to study a 19th century ostracod collection I came across specimens of this species with intact appendages protruding from their shells, an indication that they had been alive (not fossil) when collected. They were found in 1890 in Loch Leven, the largest lowland loch in Scotland and now a National Nature Reserve, so I decided to go and see if it still lives there. With the help of the reserve wardens I obtained samples that yielded abundant ostracods including two live specimens of the rare species. Studying this species and others like it helps us to understand better their distributions in relation to climate and improve our reconstructions of past climates. In this particular case there is also the conservation interest that comes from identifying a hitherto unsuspected rare species in a National Nature Reserve.

You're Director of Taught Programmes in the School of Geography. What does this role involve and how do you fit it around your teaching?

Much of it is about guiding the development and delivery of our modules and programmes so in many ways it is integral with my teaching.  It’s a challenging and time-consuming role but it means I am spending time on issues related to something I really care about and enjoy – teaching.  We are having a lot of discussions about the QMUL Model at the moment and I am starting to explore ways of aligning my own third-year Environmental Hazards module to make it attractive to students as a “QMUL Model module”, not too difficult as it already features multi- and inter-disciplinarity, critical thinking and international perspectives.

What piece of advice would you give to prospective students looking to study geography or environmental science at QMUL?

Come prepared to engage as fully as possible with the diverse topics and teaching styles that we offer.

What are your top tips for colleagues and younger academics?

Remember that without students this would not be a university.

What’s your favourite thing about QMUL and the School of Geography?

Discovering enthusiasm in students, especially when it relates to my research interests, and finding ways of supporting and encouraging it. Two years ago the QMUL expedition fund enabled two Geography undergraduates to assist me with fieldwork in the Orkney Islands, linked to their final year project work, and this year the same fund allowed three  of our students to attend a weekend field research workshop that I was running at Malham Tarn Field Centre in Yorkshire. I like the way that QMUL and the School of Geography make such things possible.

You recently had your inaugural lecture at QMUL How did that go? 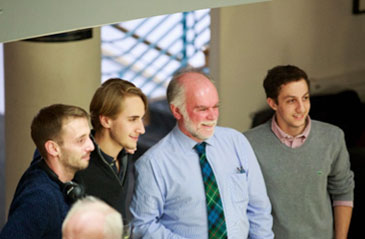 Professor Horne with some of his third-year students at his inaugural lecture.

I’m told it went well! My main recollection of the actual lecture is of trying to avoid the squeaky floorboard on the lecture theatre stage, but I did enjoy the reception afterwards, mixing and chatting with family, friends and colleagues from within and without the university, and several current and former students.

What do you enjoy doing in your spare time?

Exploring Mars by proxy via the rovers Opportunity and Curiosity. Learning songs, trying to improve my guitar-playing and occasionally performing; in February 2016 I managed to get a half-hour set in a pub in Ottawa, where I have made several singer-songwriter friends during my research visits to the Canadian Museum of Nature.