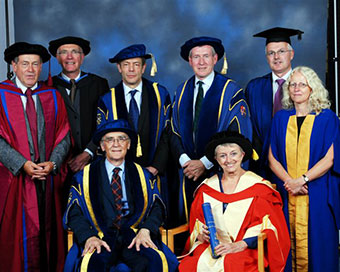 Doreen was awarded an honorary degree by Queen Mary in 2010. She was a friend and ally of the School of Geography for many years. On a number of occasions she came to share her love of the discipline, to inspire students and to provide the intellectual ideas that supported much of our work.

In his speech to present Professor Doreen Massey to college during the graduation ceremony at which she secured her honorary degree, Professor Roger Lee said the following words:

Doreen Massey was born and grew up in Manchester. She is very much a product of the remarkable achievements of the welfare state. A council house in Wythenshawe facilitated care during child-hood fragilities and she attended Sharston primary and junior schools before winning a scholarship to Manchester High School and, from there, another scholarship to Oxford University from which she graduated in 1966 with a first class degree in Geography. After a number of influential posts researching and teaching Geography and Planning, she was appointed professor of geography at the Open University in 1982. Despite countless subsequent invitations to move to highly prestigious appointments around the world, Doreen chose always to remain and work in an institution which, like Queen Mary, very much reflects her powerful belief in democracy and equality of access to education.

In her work Doreen has shown just how, in her words, “geography matters” in shaping the world in powerfully formative ways. These insights have, quite literally, changed our understanding and they inform teaching and research around the world – not least here at Queen Mary.

Doreen was the recipient of the highest academic awards including, for example the ‘Nobel de Géographie’ and the Victoria Medal of the Royal Geographical Society-Institute of British Geographers. She was a fellow of the Royal Society of Arts, a fellow of the British Academy and a founding Academician of the Academy of Social Sciences.

Doreen was awarded her honorary degree for her remarkably creative contributions to geography and social science and, through them, for her transformative impact on the politics and development of cities and regions, and for her never ending support of all those attempting to travel the same road.

Staff in the School of Geography feel that the road of geographical scholarship has been immensely strengthened by Doreen’s contribution and it will not be the same now that she has gone. She was much loved and will be missed by many.