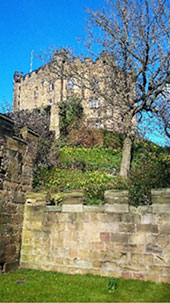 The Durham field trip is the culmination of the ‘Reinventing Britain’ module which undergraduates on the Geography BA and Human Geography BA courses can take at the end of semester 2. The module explores range of topics including the uneven geographies of deindustrialisation and crisis; Britain's new service economy; gender shifts in employment and unemployment; migrant labour; place-based competition and new forms of urban regeneration.

Lucie Glasheeen, London Studies MA graduate, currently PhD student in the School of Geography, joined first years on their fieldtrip to Durham and shared the week’s activities with us:

Tuesday
“We arrived in Durham on Tuesday and after unpacking our bags at Collingwood College we headed into the centre. Students broke up into small groups to ask Durham residents a short questionnaire, and get their views on the ‘North/South divide’, as well as explore. It was a beautiful sunny afternoon which made the survey work much easier! Durham is a small hilly city surrounded by a river and was very pretty, particularly near the cathedral and castle. Some students were a bit disappointed to see so many chain high street shops but there were also some nice independent cafes. We got back just in time for dinner. In the evening we had a very interesting lecture by Dr Robert Shaw from Newcastle University about the different overlapping approaches to regeneration that the North East Region has employed. Dr Shaw outlined the impact of shopping- and entertainment-led regeneration, culture-led regeneration and the ‘creative city,’ expanding on his own fascinating research into the night time economy. He left us with lots of questions to take with us for the next few days.” 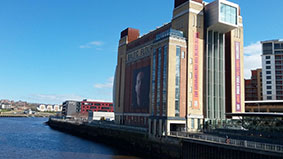 Wednesday
“Breakfast was at eight, then we piled onto coaches and headed into Newcastle on another lovely sunny day. We broke up into small groups with a choice of two self-guided art walking tours. I’d never been to Newcastle before so it was a great chance to explore. Our tour was an odd mixture of civic statues and contemporary pieces which sometimes took us a while to find, and we tried to look around us at what wasn’t on the tour map as well. We then quickly made our way down to the magnificent Tyne and across the Millennium Bridge to Gateshead and the BALTIC Centre for Contemporary Arts. We split into two groups, and my group had a bit of time to explore the galleries before hearing from Gary Malkin, Archivist and Librarian. Gary told us the story of the development of BALTIC, from its previous life as a flour mill, and how it fits into the local area, particularly in relation to Gateshead. He then faced numerous questions from students and staff alike. After the talk we had more time to look round or grab a coffee, before walking back over the Tyne to Newcastle. We detoured through the centre of Newcastle and then made our way to the brilliantly Victorian Mining Institute. We all sat in the steep-sided semi-circular lecture theatre and learned about the history (and geography!) of local coal-mining in a very enthusiastic talk. Then we drove back to Durham. After dinner we walked over to the slightly posher St Mary’s College for a debriefing and discussion of the day. We also prepared for our small group activities on the following afternoon, before our work for the day was done.” 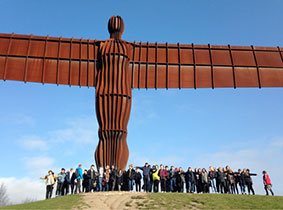 Thursday
“We continued to have warm sunny weather, and our first stop of the morning was at the Angel of the North. The Angel, which had looked quite small from the coach, loomed over us and looked spectacular against the blue sky. Everyone lined up for a picture, although I was too busy taking my own! Then we drove on to Beamish Museum, the ‘Living Museum of the North.’ We made our way to the Edwardian town, which was full of commercial advertising and merchandising. It had a very popular Fry’s chocolate shop, as well as a bakers, a pub, stables and some very gleaming engines. We had a talk in Barclays bank from Simon Wolley, Head of Learning, who was very honest about some of the difficult discussions and decisions that surround a heritage display of the past. He also gave us the context of the foundation of Beamish, some idea of its future and expanded on its ever increasing popularity. Some people hopped on a tram back, while others of us made a quick detour through the colliery on our way back to the coaches.

In the afternoon we split into seven groups for really diverse and interesting activities. These ranged from talking to the manager and users of African Community Advice North East at the Byker estate to hearing from a Financial Inclusion Consultant and conducting a credit mapping exercise. Our group was lucky enough to be given a tour of Antony Gormley’s studios in Hexham and to chat to the studio manager, although no photos were allowed! We came back for dinner tired out but buzzing with ideas for the presentation on Friday.”

Friday
“We had a lie in on our last morning and, after vacating our rooms, headed to St Marys for a debriefing and the students broke up into small groups to create their presentations. After entertaining and thoughtful presentations we had a few hours left before our train back. Our train got back to Kings Cross at quarter to nine and after an enjoyable trip we were happy to get home.”