Congratulations to the class of 2016 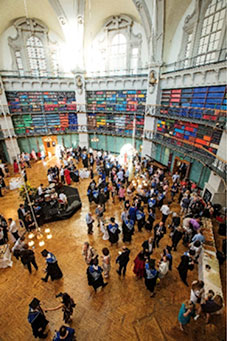 Graduates celebrating in the Octagon

Over 120 students graduated last week from the School of Geography and received degrees in geography, environmental science, as well as those with joint honours in business management.

Students celebrated their achievements by raising a glass with their peers, family, friends and academics in the historic Octagon. After this, the Class of 2016 gathered in front of the Queens’ Building for the traditional group photo. 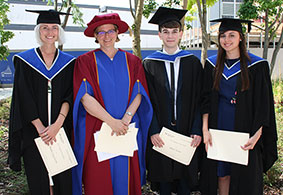 Graduate Adam Packer (Geography BA), who was President of the Geography Society in his final year and received two prizes, said: "For many, our graduation served as a symbolic ceremony or a rite of passage into full time employment or further education. Though I am celebrating achieving a First Class Honours in Geography, being awarded the A.E. Smailes Prize too - honouring the high standard of my dissertation - serves as the endorsement and encouragement for my next steps into postgraduate study. I am also honoured to have been awarded the Student Service and Contribution Award recognising my efforts at the Staff and Student Liaison Committee (SSLC), GeogSoc and Athena Swan."

“To find out that I had been awarded the A.E. Smailes Prize and the Student Service and Contribution Award was truly the most wonderful surprise. I feel honoured to have been one of those who were chosen and it was above anything I could have hoped for” said graduate Katharine Parker (Geography BSc) who is hoping to work as a geography teacher whilst studying for a masters degree in education and geography. 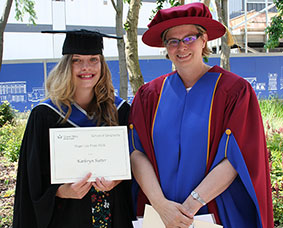 “I feel it really topped off my time at Queen Mary to win the Roger Lee Prize. It was really nice to be recognised for the hard work I put into my dissertation on food waste solutions and food poverty and I hope I can apply what I learnt from this work into helping those in need in the future” added graduate Kathryn Sutter (Human Geography BA). Additionally, Kathryn has received a volunteering award earlier this year for her volunteering activities during her time at Queen Mary.

The Simon Tavana Writing Prize is awarded to third year coursework in human geography. Endowed in memory of Simon Tavana who graduated from the School in 2004, the prize aims to promote and reward imaginative and engaging writing of a high quality. Simon was tragically killed in a car accident shortly after his graduation. The prize was created by his mother, father and sister – Deborah, Abbi and Holly – in recognition of Simon’s enthusiasm for creative writing. 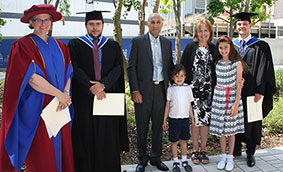 A number of honorary degrees and fellowships are usually awarded too during graduation week. Amongst the recipients was Eleanor John who received an Honorary Doctor of Letters (DLitt) degree. Eleanor is Director of Collections, Learning and Engagement at the Geffrye Museum of the Home. Together with Alison Blunt (Professor of Geography and Head of School of Geography), Eleanor is a founding co-director of the Centre for Studies of Home, a formal partnership between QMUL and the Geffrye established in 2011. Eleanor has provided outstanding leadership in developing the Centre as a long-term and sustained partnership between the museum and QMUL. 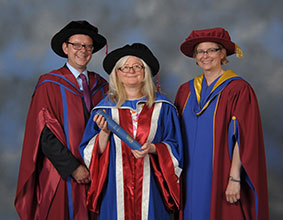 The Centre for Studies of Home is an international hub of research, knowledge exchange and public engagement activities on past and present homes. It spans work on the domestic sphere as well as broader ideas about dwelling, belonging, privacy and security. After receiving initial funds of £10,000 from the QM Innovations Fund, it has generated over £1.09m in research grant income in five years to support 11 collaborative PhD studentships; four postdoctoral research fellowships; and two artists-in residence. 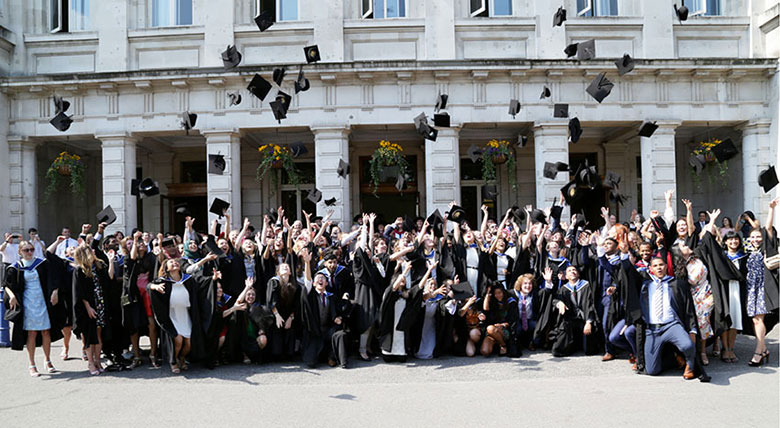 For more pictures from Graduation Day 2016, please take a look at our Flickr page.