What can we learn about the lives of teenagers from their bedrooms? A new display at the Geffrye Museum steps inside the bedrooms of 26 London teenagers, and explores how these private spaces express identity, memory, and friendship. 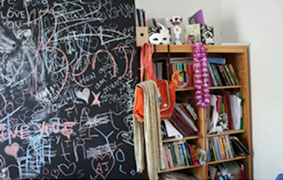 The display is curated by Carey Newson, a PhD researcher from the School of Geography at QMUL. Carey spent a year interviewing teenagers and parents for doctoral research at the Centre for Studies of Home, a partnership between the Geffrye Museum and QMUL. She worked in collaboration with photographer Kyna Gourley to document bedrooms that could be tidy or chaotic, loved or neglected. The research included teenagers who shared a room, as well as those who had a room in the home of each parent.

“Most of the teenagers saw their rooms as a reflection of their own individuality – changing as they changed over time. Within the home, the teenage bedroom is often a space apart, described by one teenager as “a house inside of a house,” said Carey.

Carey found that the teenagers she spoke with saw their rooms as more of a retreat than a social space. “They were especially important at times of stress: a place to simmer down or let rip, to shut the door with relief – or slam it in anger. Souvenirs, images and other meaningful items were displayed more for the teenagers themselves than for others. There were moments of collaboration, tension and compromise with parents as the teenagers tried to make these spaces uniquely their own,” said Carey.

Teenagers’ parents were also interviewed and reflected on differences between their own remembered teenage bedrooms and those of their children. In present-day rooms, the mobile by the pillow or the laptop on the duvet is a recurrent sight, and the bed, often a double, is an island of comfort from which to connect and communicate. At the same time, some teenagers find special appeal in the tangibility of earlier, non-digital forms of communication, such as letters and vinyl records.

The display is free and runs from Tuesday 4 October 2016 to March 2017. The project is supported by the Centre for Public Engagement at QMUL, and funded by the Economic and Social Research Council.