What can art tell us about home?

How can the relationship between home and art be explored? What are home scholars saying about art? How are artists, performers and curators engaging with questions of home? In what ways can collaboration allow for new understandings of home?

These questions and many others formed the basis of a one-day workshop on home and art held at the Geffrye Museum of the Home on 1st May 2015 and organised by Dr Olivia Sheringham and Dr Richard Baxter from the School of Geography, Queen Mary University of London. The event brought together artists, scholars, curators, architects and performers – as well as combinations of all of these - to participate in a rich discussion on the intersections between home and art.

Critiquing everyday life
The day’s programme comprised of three thematic panels and two keynote lectures, by art historian Gill Perry and conceptual artist Sutapa Biswas. Opening the day, Gill’s paper raised the question: ‘what distinguishes critical forms of visual art from the commercialised and myth-ridden representations of art that perpetuate in the popular imaginary?’ Discussing installation art by Cornelia Parker, Michael Landy and the Heidelberg Project in Detroit, and drawing on theories of ‘everyday life’, she examined the role of art in playfully critiquing everyday life and its wider social and political contexts. 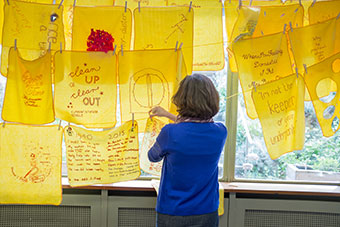 Material cultures of the home
The first panel, ‘Inside Home’, show-cased the blurring of artistic and academic practice as all presenters were artists and academic researchers. This time drawing our attention to material culture and domesticity, it included Vanessa Marr’s community participation project on the domestic duster (see Figure 1), Sarah McAdam’s doctoral research on art inside the home and Cate Hursthouse’s detailed unpacking of the domestic tablecloth. Thinking about the relationship between domestic textiles and the unhomely, Cate argued that transporting the tablecloth to the art gallery dramatically alters its status and signification. Finally Laura Cuch’s slide show used an old-fashioned carousal slide projector to display images of her childhood home in Barcelona. The accompanying autobiographical text took us on a journey of reflection on how the meanings of domestic spaces and objects are deeply intertwined with the lives and relationships of those who inhabit them.

The politics of home and art
Reflecting on her own trajectory, conceptual artist Sutapa Biswas used the prism of home to explore wider questions of identity, race, gender and colonialism. Showing how art can reflect and support white domination, she explored the impact this has on feelings of belonging for non-white artists. These issues set the scene for the second thematic panel ‘Domestic Marginality’. Janetka Platun presented ideas for her new photographic project, which explores how migrants make home when a dialogue of anti-immigration dominates the political and social landscape. 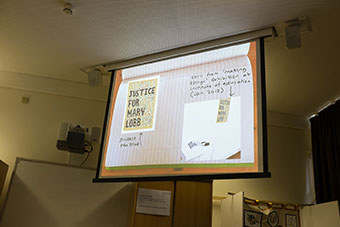 Examining racial violence and exclusion in the UK, though through a different lens, Alice Correia discussed the Caribbean-born British artist Donald Rodney (1961-1998), in whose work – which included a miniature house made of his own skin - home is transformed from a site of terror to one of emancipatory resistance. Rodney’s work brings to the fore the ability of art to evoke intense discomfort and, thus, challenge everyday practices of injustice. Turning to home, art and activism, Sean Curran’s paper examined his own curatorial practice in unearthing the narratives of LGBTQ in historic House museums. Finally, QMUL Geography’s David Pinder discussed artist Graeme Miller’s sound walk ‘Linked’ to examine how art can be used to address displacement and home unmaking, as well as the ways in which art resonates in different political and historical contexts.

Performing home
The final panel, ‘Performing Home’, examined different ways in which home becomes a site and subject of performance and performative practice. In the first presentation architects Jon Orlek and Cristina Ciurelli discussed their practice, Studio Polpo, which has initiated a series of residential performances in public spaces, called Open Public Experimental Residential Activity (OPERA). Paul Merchant dealt with performativity in a different way, through an Argentinean film El hombre de al lado where the protagonist seeks to create an ideal modernist home. Nadege Meriau’s intervention included the screening of her mesmerising video piece, which explores the unmaking of utopian modernist architecture through the metaphor of a beehive.

Also examining estates, Katie Beswick criticised artists-in-residence for being complicit in reinforcing negative or glamorised representations of estates in the popular imaginary. By discussing the performance art of resident artist Jordan McKenzie, she again highlighted the difficult politics of artistic representation. 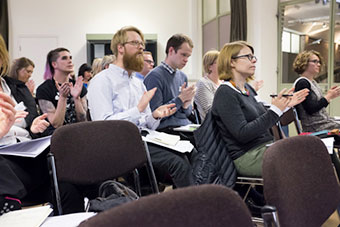 The day concluded with Cultural Geographer Harriet Hawkins who drew out some of the different ideas of home discussed throughout the day and put forward questions that need further inquiry: ‘What does it mean to intervene in aesthetic practices of home?’ and ‘What are the politics of practices in collaboration and curation?’ The workshop was the beginning of what we hope will be an ongoing discussion on the intertwined politics and practices of home and art.

The event was jointly funded by the Leverhulme Trust, The City Centre and the Culture, Space and Power research theme in the School of Geography Queen Mary University of London.