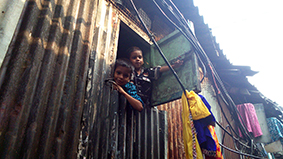 Children living in Dharavi, one of the world’s largest slums © Charlotte Lauder

“‘Dharavi, always Dharavi’ – that’s what a little boy hoping to become a policeman in one of the world’s largest slums said to me,” BA Geography student Charlotte Lauder said. The 20 year old, who had never travelled to India before, was part of a team of students that has just returned from India where they were investigating poverty, hope and survival in southern Mumbai. “It’s easy to have pre-conceived ideas about a place and its people before you’ve experienced it for yourself and I think this is where field work is so important at degree  level,” she said. “We spent the latter part of the trip working on our independent research project in Dharavi and the people we met showed us how passionate they are about their community – one so large it has its own police force and exports goods around the world. I had assumed the community would be working to leave, but for this young man, there was no question that he wouldn’t stay and contribute to his community.” 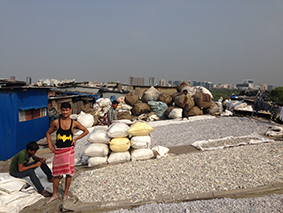 The module Charlotte is studying, Development Futures: Mumbai Unbound, challenges the long-standing division between economic and development geography and allows students to position their studies amongst some of the very latest academic thinking. “Examining the two themes together helped us to take quite an innovative and holistic approach for our research,” Charlotte – who is co-president of the Geography Society, added. “We had briefing sessions at the end of every day with our lecturers to go through what we had learned and to channel this experience into our research projects as we went along. It was amazing how much our work developed during the trip and meant that by the time we came home, we had moved our projects on leaps and bounds.” 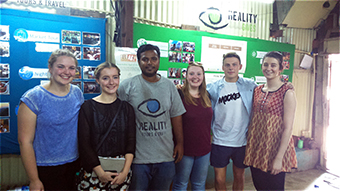 Other teams were investigating Mumbai as a globalising city as well as examining the rise of India’s new middle classes. “The importance of field work at degree level cannot be underestimated,” said one of the trip's co-organisers Dr Al James, a reader in economic geography. “Having the opportunity to visit the Global South is incredibly important for students to develop a critical perspective on western-centric theories of how cities and economies are assumed to function.  There is now a rapidly developing research agenda which shows that there is a lot more to life in the Global South than 'development' alone.  By exploring these ideas through direct engagement with a range of local stakeholders and organisations in Mumbai, students are able to produce exciting independent research that genuinely challenges the intellectual boundaries of economic and development geography as conventionally defined.”

Charlotte from Wakefield, who is planning to continue her studies with a masters in the autumn, said she wouldn’t change her experience at QMUL Geography for anything. “The broad base of geographical knowledge you develop in the first year sets you up to make the right choices around your own interests in the second and third year,” she said. “The module Spaces of Uneven Development really sparked my interest in the second year and since then I’ve been able to pick modules about development working with academics such as Dr Philippa Williams and Professors Adrian Smith and Cathy McIlwaine. I don’t think I realised the true potential that geography as a discipline offers when I first thought about applying but I’ve found my speciality in development and gender studies and it’s given me my academic direction in life.”