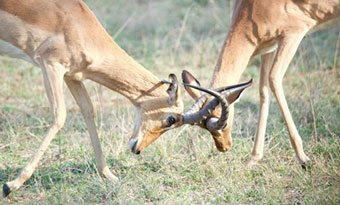 “In September 2015, I had the pleasure of attending a field course for the Tropical Ecology module. The field course was held at the Wits Rural Facility in the rural township of Acronhoak in South Africa. The location of the course was stunning, the site was a 450 hectare area of pristine Savannah grass/shrub land, with a range of species on site e.g giraffe, impala, vervet monkeys and waterbuck to name a few. The facilities on site were great, consisting of an arrangement of guesthouses that we could share with friends, a central kitchen and dining area where we took turns cooking food for the group and a swimming pool!

“I missed the bus to the location and had to get a 450km taxi that I would not recommend doing, the taxi man was lost most of the way, however we still arrived there before the bus which was amusing.

“The work on the trip was varied and interesting and there was ample time to enjoy the surroundings with excursions planned by the organisers. On arrival the first few days were spent doing various projects including a camera trap experiment which consisted of placing motion sensitive cameras in strategic locations in order to capture images of species present. This experiment was conducted throughout the whole time and a report of the mammal population constructed at the end. Other projects which we did on site included looking at the ant populations of the area and also the parasites presents in vervet monkey faeces (this was rather interesting as the monkeys on site were rather cheeky and would do their best to sneak into the kitchen to try and eat our food).

“We went on a few excursions off site, the highlight of which in my opinion were the two days spent on safari in Kruger National Park which is one of the world’s premier conservation areas. We saw a whole range of animals including four of the ‘Big Five’, the leopard remained elusive unfortunately! My personal favourites where the rhinos and the hippos. I think I have a thing for large grey things. These two days in particular were amazing and will remain with me until I’m an old man.

“We also had a tour of the vegetation by a local botanist. He was a very interesting man who had some quirky views on plants (he called them cathedrals and likened cutting a branch off a tree like cutting the arm of a man). He was the archetypal old school botanist, wearing all khaki and knee high socks with a walking stick. He took us on a 4-hour hike through the hills of the area and gave us talks on the vegetation. It was very interesting in terms of the ecology of the area but also as a humane experience. He lived with his brother in the hills with 15 daschunds which was a slightly surreal experience. 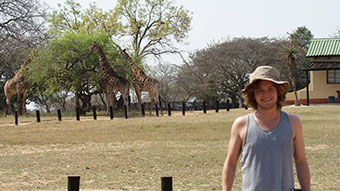 “We also had to undertake a group project. The project that I worked on was the impact of impala exhibiting latrine behaviour on vegetation. The fieldwork was done at WRF and the write up completed in London.

“A more personal highlight was while floating in the pool alone, two giraffes came up and started feeding on the tree directly beside the pool. This was amazing and surreal and happened on the second or third day, and I felt very much so that I was in Africa and I loved it.”